Brett "Lil PP" Maxwell is a character role-played by BoomSlapper.

Brett Maxwell moved to Los Santos to live out his dream of being a rapper. However he feels he needs to prove to himself that he is worthy of the rapper lifestyle. All of his actions revolve around this goal of becoming a rapper.

Brett is seen with various different outfits inspired by other rappers.

Throughout his time in Los Santos, Brett has been part of various different types of religious groups/cults.

The Church of Jesus Christ of Latter-day Saints

Brett was inducted and baptized by Spencer Smith after meeting him at Burgershot. His duties were to help "anyone and everyone with anything".

This ended when he was exiled by Jackson Cole after Brett stole Garry Roche's friend's taxi after he received a call for help. He felt he was doing the right thing, but did not get the opportunity to explain himself. He was kidnapped and shot in the swamp.

As he moves close to his goal of becoming a rapper, Brett found himself on a path of selling his soul to the devil. He sacrificed several people through various methods. This arc concluded when, with the guide of a paranormal investigator, he conducted a ceremony that resulted in the paranormal ceremony being shot and surrounded by human remains.

Brett was held in captivity by Rick Locke, where he was tortured and brainwashed into following The Smileys. After being released, he met with his new found family.

Brett's mental state is uncertain and his memory is hazy. Since this process was done by Rick, who is inexperienced with brainwashing, there are signs showing that this was not a perfect brainwashing. Time will tell where this will lead... 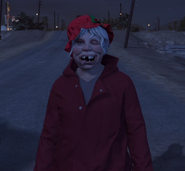 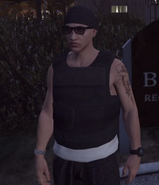 Meeting with Smileys
Community content is available under CC-BY-SA unless otherwise noted.
Advertisement