Bovice was sentenced to life in prison for the first-degree murder of a Liberty City Judge and was subsequently remanded into custody at Bolingbroke Penitentiary.

Bovice is the most notorious criminal in the history of Los Santos. His personal and criminal ties have been unknown but are starting to be revealed through work by the LSPD. There is speculation that he may be behind many of the city's most heinous past and present crimes. Bovice should be considered armed and dangerous at all times. Any information about the whereabouts of Bovice should be given to the police.

"This is #BoviceWorld, we just live in it."

Bovice is the most notorious serial killer in the history of Los Santos. He has surpassed all those before him with his elaborate planning, ties to gangs such as Chang Gang, Prune Gang, and Leanbois and his willingness to use unsuspecting people in his plans. The police have been unable to apprehend him, even though they are inching ever closer, with Kael Soze of the San Andreas State Police leading the charge. Even with all of these "successes", a couple of Bovice's allies have begun to question whether helping him is the right idea, as the Department of Justice has not only thought about raising the bounty from $800,000 to $1,000,000, but has said that all those helping Bovice will potentially face life in prison.

Eventually, through pressure by Arthur Hammond (The Doctor), Gomer Colton turned on his former associate; kidnapping him with The Doctor by luring him out using former District Attorney Adrienne West. Once captured, Bovice was taken back to Gomer's home which Bovice was living in, and tortured by Hammond and West. Bovice's fate now rest in Hammond's hands, and his future is uncertain.

With Hammond having left the city, Bovice's fate is unknown, as both have gone missing since this date.

Having been presumed dead, Bovice has returned. He has found an ally in the presumed missing Arthur Hammond, and both have returned with vengeance to a very different city. After months of inactivity, Bovice issued an ominous tweet which read: "The Doctor is in."

Bovice was turned in to Judge LaBarre and LSPD's Darrel McCormik by Arthur Hammond, Erin Cox, and Gomer Colton. He was delivered via helicopter provided to the group by Andrew Ducksworth. [1]

Arthur has claimed that Bovice has been drugged by him prior to drop off, and he wishes the "best of luck" to the prison doctors. Upon arrival, Bovice was introduced to his new "held until trial" prison mate, Denzel Williams.

Bovice quickly reacclimated himself to his prison environment. Although the prison underwent many changes and expansions since he was last there. He met an overly aggressive CO named Pat Downing who questioned "what makes Bovice so special?" , to which Bovice replied he would "soon find out". While resting in his cell, he had a dream of a lighthouse and nearby house. He tried to enter the house but it was locked. When he awoke he left to explore the prison. He reassured himself that the entire prison belonged to him.

Meanwhile, members of the Leanbois entered the prison cafeteria. Bovice always had a good relationship with the Leanbois, especially Lang Buddha. He told them he was sent back to prison by The Doctor, and it was all part of the plan. While in the prison yard he spoke to a fellow inmate Chris "CP" Porter who told him that the prison yard gym was his. CP agreed to tell other inmates they must pay a tax to Bovice to use the yard gym. CP also agreed to help find items for Bovice both in and out of prison.

"We all gotta follow The Doctor's orders, some way." - Gomer Colton

Bovice walked past Gomer in the prison yard and ignored him. Gomer followed him and wanted to talk, he claimed he owed a large debt to The Doctor. He says The Doctor asked him to betray Bovice, and he kept Gomer's friend's alive. When Bovice asked why, Gomer said he did not know why but thinks it had something to do with Raven having leverage on him. Bovice seems more curious than angry and tells him it was not the best of plans. He claims he did not know what would happen when he left Bovice with The Doctor. Bovice claims he does not remember much of what happen after. Gomer then tells him he didn't feel right about it and he vows to never go "down that rabbit hole again."

Gomer claims his debt to The Doctor is settled. Bovice dismisses Gomer's claims and says that The Doctor is the reason he is now back in prison. Bovice says he had big plans prior to his capture and now they have stopped since he was captured. Bovice tells Gomer that he cannot access his funds, so he can no longer pay people to work for him. Gomer feels guilty and tells Bovice he owes him a favor. He claims The Doctor misled him about the situation and then left town. Bovice tells him he will think of a way Gomer can literally pay for what he's done. He asks Gomer to help him get money into the prison. Gomer agrees to bring him in $50K over time, the money is actually money Gomer stole from Bovice during the betrayal. Bovice agrees because he can use the money to control prison, and possibly rebuild his trust in Gomer.

Not just a trending hashtag, this represents all those affiliated and not yet implicated in the crimes of Bovice. 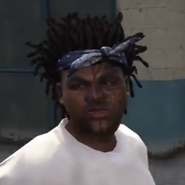 Bovice as Steven with Siz

Bovice stalks his next victim

Bovice in his kill house

Bovice meets with West, Gomer, and The Doctor 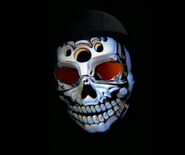 We Will See You Soon 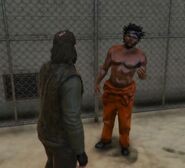