The BBMC is a Motor Club that embodies chaos and the spirit of sending it, which they learnt from their Prime Minister Irwin Dundee. The club's primary business is robbing banks, as well as the production and distribution of meth through pushing on the streets and armoured meth transports. Various members also have involvement in weapons trafficking, the sale of explosives, the production and distribution of weed, street racing, boosting, vin-scratching vehicles, and legal business.

The BBMC have operated out of Vespucci ever since they were founded in April of 2021. Their focus is to protect Vespucci from crime (that isn't being commited by themselves), and bring life to the area.

As a Motor Club, the BBMC are muscle car enthusiasts, with most members having a muscle or vintage vehicle painted in what is called Bondi Blue; midnight blue with an ultra blue pearlescent.

Patched and prospected members are often seen wearing blue, red, white or black denim jackets and vests with a few smaller patches and a Bondi Boys MC patch on the back. The club has different variations of kuttes for different ranks, including name and rank patches for High Command.

The BBMC's main centre of operations is gated city block between Melanoma St and Bay City Aveue that is split into two rows of houses by an unnamed alley. This area is colloquially known as "The Billabong".

This is the BBMC's home, and the club regularly conduct meetings in the Billabong and spray paint around Vespucci. Since buying multiple houses within The Billabong, they have also started leaving signs warning against trespassers, and regularly scare off intruders, including shooting police officers who enter their territory and refuse to leave.

The club, especially Pez and Barry, are hoping to stake financial claim to the turf by establishing local businesses, including the The Pit Tattoo Parlour and Bluey's Bar, both of which are approved and are awaiting finalisation of construction plans. 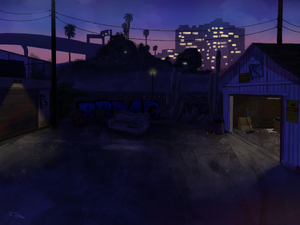 These rules were first implemented during the BBMC/Mandem war and are effective during any gang war.