Boe Jangles was a criminal and had connections across the city. He was close friends with Charles Johnson. He also had close ties with Chang Gang and was initiated into the gang on July 8th, 2020. Boe often hung around the tuner shop and enjoyed customized cars. He worked for the White Widow Dispensary

On July 4th, 2020, Kenny Tancredi (the person behind bLuE622), passed away unexpectedly at the age of 30. The NoPixel community hosted a funeral event on July 8th, 2020. In his honor a monument in the form of a permanent NPC of his character model and his personal vehicle (bearing a license plate with his internet pseudonym) was placed in front of his former Mirror Park residence. Additionally, his name was added to an existing monument in Legion Square for those in the NoPixel community who have passed. He will be deeply missed by his loved ones and the gaming community. 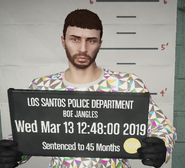 Boe and his CG Brothers #RIPBlue

Add a photo to this gallery
Retrieved from "https://nopixel.fandom.com/wiki/Boe_Jangles?oldid=88773"
Community content is available under CC-BY-SA unless otherwise noted.