Bartender at the Mirror Park Tavern

Car Dealer for The Hobos

Blanden Haster is a character role-played by JustenTymes.

Blanden was born on January 24th, 1991 to a wealthy West Virginian family. It is not known where exactly Blanden was born, but it is presumed that he grew up and lived in roughly the same locality until his late 20s, when he became estranged from his family, subsequently leaving them and his girlfriend for a new life in Los Santos.

On his first day in the city, he was abducted and inducted by The Hobos and instructed to sell cars. However, due to sparse buyers, Blanden secretly joined another group to sell from a food truck. Eventually The Hobos found out, and with bridges burned, Blanden was left on his own.

During an HOA training outing between him and other Mirror Park Gas Station Taco Truck employees, he became addicted to meth. This addiction was later cured through electrical shocks, although causing a new addiction: Adrenaline.

Although he chooses to keep a distance from his immediate family, Blanden has been known to make trips back to West Virginia to take care of his ailing father. Furthermore, his maternal grandmother, Winifred Bodooga, has since relocated to Los Santos and is known to be in contact with Blanden.

Currently, Blanden continues to find employment with the HOA as a bartender at their Mirror Park Tavern. He can often be found there, or working the HOA's food stalls at Dean World or the Andi Jones Farmer's Market in Paleto.

On October 23rd, 2021 the HoA suffered a great setback in their overall criminal endeavors after most of their drugs, weapons, and other illegal items were seized in a raid on their collective stash warehouse. With the warehouse being listed under his name, he is currently wanted for drug trafficking and other crimes. He was told by high-ranking HoA members to request for a lawyer as soon as he gets caught, though he plans to outrun his arrest warrant (which lasts for 60 days).

Blanden, laying on a counter in NPC garb. 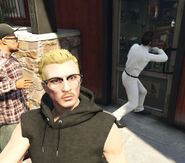 Blandon taking a selfie while Stanley is begging for keys for the Mirror Park tavern
Community content is available under CC-BY-SA unless otherwise noted.
Advertisement