Blaine Burke is a character role-played by HARMSwahy.

Blaine Burke is a soft-spoken man who sports short, slick-backed hair and a skull mask to cover his face. He is forced by his friends to wear the mask due to his unseemly appearance, nobody wants to look at Blaine's face.

He was a member of the Angels of Death MC before they disbanded and was a hang-around with the HOA.

Blaine had been trying to forge relationships within the HOA to potentially become a prospect and eventually a full member. Blaine has proved to be a reasonable team member, and has proved himself with feats such as: Speech Level of 98, and tactical shootout capabilities.

On top of his horrifying face, Blaine also has a deplorable fashion sense. Manny has scolded him on multiple occasions for his attire.

Blaine had a love/hate relationship with Eggroll. Are they friends? Are they enemies? Find out next episode on this season of Hogs of Anarchy.

One day, Blaine hopped into Sonya Summers car to say hi, she assumed he was vulturing and robbed him. This led to a confrontation between the Fudge Lane Ballas and the HOA where after an accidental Oxy nearly started a war. Blaine was being punished and has to re-earn the respect of his betters among the HOA.

He was traded to Garage Q (Steele Security) on June 29th, 2020 in exchange for Evee, a fellow member of Garage Q. The trade contract, which was drafted by Louis Baton and agreed upon by Siz Fulker, stated that Garage Q owned 90% of Blaine whereas the HOA owned 10%. Upon discovering this, Blaine and fellow members of the HOA were disgruntled at the actions Siz had done to get rid of Blaine from the HOA. Blaine was disappointed and saddened because he felt like he was done dirty and his actions he had done for the group were not rewarded. Shortly after, he departed from the HOA and will not be upholding the contract.

After departing the HOA, Blaine was asked by Claire Seducer if he was interested in joining the Angels as she had always thought Blaine would be a good fit for the group, having met him several times and both having a Mazda Miata which they had bonded over. Blaine agreed he would like to join and became an Angels Associate, having to earn his place in the group. After several jobs and saving several Angels members from going to Bolingbroke Penitentiary, Blaine earned his tattoo Wings and became a fully fledged Angel. 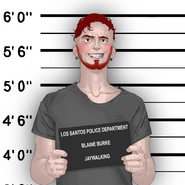