Billy Sprinkle is a character role-played by BananaDuck.

Billy Sprinkle is a hobo gangster and criminal mastermind. His criminal repertoire includes drug-dealing, robberies, mayhem, and arson. Billy is a member of The Families and a former member of The Hobos.

Despite his low IQ, Billy is quite eloquent and is known to handle risky situations by talking his way out of them. However, after more than a year of staying in The Families, Billy believes he has become smart and responsible with his actions as his goal in the gang is to become an OG. He is usually known for random acts of violence like smashing his head against walls and stabbing people - an act that he has since substituted for hammer attacks instead. Because of his charming character, Billy is able to make good relations for the gang and recently nicknames himself "hood diplomat" not too long after.

Billy only smells of a bin if one is downwind of him and loves wearing shirtless showing his unique physique, much to the disdain of some of his fellow homies, especially OG Carter Dennis Banx.

His birth was not an easy one. His mother was not aware of her pregnancy with Billy. She thought for months that she had gained weight and that this was the reason for her enormous belly. One day, he fell out of her straight into the toilet and was left there alone for a few days. During this time he built up an extreme tolerance to bleach thanks to his diet of toilet cleaner and cigarette butts.

While they have not been seen in the city, Billy has made some colorful claims in regard to his family tree. He had a mother, called Gilly Sprinkle, who worked as a prostitute in order to ensure her son could wear Nike Air Maxes in the 1990's. The last time he saw her, he allegedly left her in a taxi cab in the hot desert of Las Vegas. She couldn't open the doors with her arthritis and allegedly this is what caused her death. None of these allegations have so far been proven in a court of law. He has a grandfather called Wilbur Sprinkle who refers to him as a waste of biological material.

Billy prides himself in his ability to move throughout various groups in the city, as all could benefit from the company of their own resident hobo.

Months of searching, Billy has found the company of fellow hobos Kyle Brovloski and Antonio Reyes under the bridge near the Vanilla Unicorn. He and Kyle adopted a young Goblin who then betrayed them for a life of honest work at Rooster's Rest, a betrayal that has broken Billy's heart. Billy has aided in growing the hobo family via accompanied Kyle in his Hobo Boxing tournaments, robbed unsuspecting delivery drivers, and administered top secret initiation trials that are rumored to involve bridges and electrical transformers. After Kyle and Goblin have gone missing for months, Billy returned to the streets alone until he was picked up by his longtime best-est friend and gang leader of The Families, Dexx Martin

After months of keeping his eyes on the streets out of respect and love for Dexx Martin, Billy was jumped into GSF and currently holds the rank of Fresh G. GSF is the only gang to ever take Billy under their wing which has inspired his loyalty as he does not fear they will leave for cigarettes and move to Mexico. He is a security guard at the Vanilla Unicorn. Billy was told to "never change" by Dexx, and has continued to make his mark on the streets of Los Santos with his own unique brand of hobo mayhem while defending his family and turf should the need arise.

Billy has become a homeowner for a year, and has previously shared the house with Lavante Lamano. Despite giving up his bin boxes at the homeless camp for shelter in GSF, Billy proudly believes he's still living the "homeless lifestyle" as he tells visitors that he brought the streets with him with what looks like a mess of a crack house turned "escape room". Billy's house has soon become infamous in the city for its "particular design". He now lives with a new roommate and old friend from London, Arthur Deel. Marge, a mysterious spirit that inhabits a mannequin still stays in their living room.

While his own biological family has more or less abandoned him, Billy has a knack for picking up new chosen family. Besides his Grove Street Family, Billy has acquired an uncle, James Randal, who refers to him as Ricky. He has also been adopted by Gordon Parks as a grandson as they both have a passion for riding lawnmowers on Forum Drive. Billy also adopted LSPD Officer Frank Williams as his adoptive brother after being longtime frenemies with each other. Months missing, Billy reunited with Goblin and took him as his son. Not too long after a DNA test, Billy also found his long lost son Tony Block and his ex-wife/husband John Television, who apparently also served in Vietnam with Billy.

Months after the economic crash, Billy reunited with Fiona Stewart, his first adoptive mother upon his first time visit to the city. He was again readopted and gave him the keys to her home, the Bean Manor.

After countless stealing, chasing, and wrecking Microphone's car, the Donk, Billy and Microphone's brotherly feud escalated, from Microphone's one day in ICU to Drew being caught in crossfire (Microphone shoots Drew and Carter in frustration towards another car prank by Billy). Billy gets demoted to Baby G after disobeying OG DK's order (prior to the shooting) not to mess with the car. Further in time Billy gets his rank renamed to Fresh G.

After the BSK/GSF war, a drunk Dexx granted Billy his commitment to playing poop shoots together, a long-held promise made during their first meeting in prison. Poop shoots is a game of racing one's poop in the canals. Dexx won and proceeded to shoot the bridge lights with Billy.

Since the new farming tools have been introduced to the city, Billy has found passion in growing and selling weed. Soon he earned himself reputation to be able to name a new weed strain, the "Mary jANE oBAMMA", after his 'dead' ex-wife. Even if his strain isn't chosen to distribute in the weed cartel, Billy was given a task to be one of the main growers for The Families. Two weeks later, Billy gave up on their operation shortly after two large-scale grow ops were compromised by police authorities. The last event that broke the camel's back was the compromised grow on Burn Island. 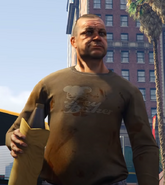 Billy in his favourite green jacket

Glue Guy gets a therapy session from Billy

Billy at his front yard 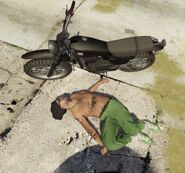 Billy drunk on the block