Billy Phresh is a character role-played by JonnyRotten.

Billy is one of the founders of Street Team. Originally from Boston, MA, he was kept in a warehouse chained to the floor and was used to test different drugs that were being manufactured & to cut up and dispose of bodies for the gang that ran it. The warehouse was given to the Forsaken Motorcycle Club to run and Billy alongside with it.

Billy worked alongside his "cousin" who was the Sgt. at Arms of the Forsaken MC.

He only remembers the last 5 years of his life which he spent in various places including Boston, Chernarus, Liberty City and now Los Santos. His cousin helped rehabilitate him with the help of Sammie & Laura who functioned as his therapists. They taught him how to speak, read and understand how the outside world works. They found that marijuana worked as a sedative to keep him relaxed & his violent tendencies locked away.

Due to all the various drugs that were tested on him, Billy has experienced a large variety of drugs and is usually high and willing to try any drug that is given to him.

Billy reunited with his friends and started off doing the various civilian jobs throughout the city. Billy would buy the maximum amount of weed that he could from the vendor across from the Mirror Park Tavern and pay people double the price if they would buy weed for him as he smokes a lot of weed. His main goal was to be hired at a dispensary, as weed is basically a medicine to keep him relaxed and happy.

He considered interviewing with all 3: Roosters Rest, SmokeOnTheWater and White Widow, but decided he would only interview for SotW and WW due to them being the underdog in the dispensary business and wanted to help build their reputation. Billy met Sarah Ableton on April 20th 2022 at the VLC while appraising a gem with Nicole and started talking about weed with her. After talking for 15-20 minutes, Sarah hired Billy on the spot as a Budtender. Billy helped Sarah come up with ideas and business promotions that would help WW break their profits week after week. He would eventually become the lead manager under Sarah and helped design various strains, bongs & pipes and a membership reward program to help out the loyal customers.

During this Billy would receive a lot of sketchy phone calls of people asking him about weed and various strains people had "acquired" without really knowing how or where they acquired it. Billy's friend from Liberty City, Jaylen "LampPost" Carter was fishing down near the Green Beans farm when Wayne approached the people fishing and stated that people had been stealing a bunch of his weed and if anyone had any information to give him a phone call. Jay relayed this information to Billy and Billy had several phone numbers saved in his phone from various sketchy people that had been calling asking about strains and various things. Soon after Jaylen and Billy met with Wayne and told him all this information, to which they went to try and capture these people to have a meeting with Wayne to determine if it was them who were stealing his weed. This resulted in 3 of the suspected thieves being captured and brought to the lighthouse to where Curtis and Vinny came masked up. Curtis was surprised to see Billy here as he has been selling Billy lockpicks in bulk to which Billy has been flipping to various people for $10-$20 profit. After finding that one of these people was a snitch he was attacked by Vinny's dog and stabbed by Shankeal.

Wayne then stated that we worked for him directly has his security team and called us his "Street Team" and thus Street Team was born. As time went on the boys and Wayne became closer to which they started doing large grow ops with the Changaloa Cartel. This resulted in a conflict of interest with his managerial position at WW as he did not want to get Sarah and the business in hot water if he were to ever get caught doing 100-200+ plant large grow operations. Consumed by guilt Billy eventually told Sarah that he and his friends started working for the Changaloa Cartel. Sarah became angry at Billy as she believed he was leaving her to help a rival organization. Billy stated that he did not want leave WW but also wanted to ensure everyone was safe and didn't want anyone to be "swinging from a rope in Juarez".

One day Billy was called to assist in the biggest operation to date and was an all hands on deck situation to which Billy met up with Sarah and stated that she needed to fire him as he was convinced he was going to get caught and end up in jail for the 9's. Sarah saw this as a betrayal and fired him on the spot and told him that he will never be able to return. This broke Billys heart as Sarah was very important to Billy and gave him the opportunity to prove himself within the business when most saw him as a druggie. Billy would help WW from the background with his friend, Mercury Frost, who was also a manager at the business. He asked her to not tell Sarah that he was helping from the shadows to help the business still even though he was not apart of it. He would assist her with dealing with weed thieves, providing weed and seeds when the business was running low, and acting as a bodyguard during transports to ensure everything was running smoothly in his absence. Sarah eventually forgave Billy after sometime had passed.

Billy was hired at Otto's Autos as a mechanic under Mila Smoak, as they have known each other from Liberty City. He would help out at the shop when he could to help Mila mostly, and didn't really care if he was paid or given commission, but Mila insisted that everyone gets paid and he would not be an exception.

Nicole and Leah Strong had been dating for quite sometime and eventually after many months of peer pressure Nicole agreed to say she was Billy's mom as he called her mom most of the time. Leah became Billys Step Mom and hired him at BBC to do car customization and assist with tows on cars that defaulted on their Fast Loans.

After buying lockpicks from Curtis Swoleroid on a regular basis, Curtis asked if he wanted to join Swole Creations as the first sales member to help sell things for the company. Curtis stated that hopefully in the future the goal would be to make daggers, brass knuckles and other melee weapons and possibly a Katana being his main interest. Billy began selling "waitlists for the Katana"(which was the goal for Curtis but not official yet) which started at $100 to $1000 to ordering a Switchblade This list has grown to over 70+ people as of January 5th. Once Curtis showed Billy the bench and that Katanas were actually able to be made, Billy became very nervous as he realized all the people he believed that he scammed were going to want their Katanas. Curtis introduced him to Penny Farthing and as the more they worked together the more they became fond of Billy and stated he wanted to adopt him, to which Billy said do it then. Billy wanted to surprise Curtis with a Xmas gift so he enlisted the help of James Arsenal to create a Promo card for Swole Creations. James knew Billy didnt have a lot of money as most of it was spent on drugs and guns, so he offered to do the card free of charge on the condition that he gets moved to the #1 spot on the Katana waitlist, to which Billy said yes without hesitation. Curtis ended up adopting Billy on December 26th.

Billy and James became friends as they spent a lot of time together as Otto's. Billy's friend Freddy Fastfingers started supplying him with copium and meta morphine as he knew Billy was heavily involved in the drug scene and asked him to sell some for him and give him back a portion of the money. Billy stated he would give Freddy 100% of the money and wanted to be paid in drugs instead, since he would just use the money anyways to buy more drugs. Freddy and Billy went on an adventure giving various people in the city "Christmas Gummies" which were these unknown pills that resulted in hallucinations. Billy enlisted the help of James Arsenal to help get word on the street out about all these pills as Billy claimed it to be the best drug in the entire city. Freddy stated that he would get in trouble if he kept giving pills out directly and stated he should contact Siz Fulker as he thought that Billy would make a perfect candidate for the drug trials in Mirror Park. This resulted in a meeting with Siz and Billy bringing several people to his house for these drug trials. Siz gave Billy and James about 200 pills and 30+ syringes of Meta Morphine. James and Billy spend the rest of the night going around spreading the holiday season getting as many people as possibly to experience "the spirit of the holidays". This resulted in EMS, Police, Dispatchers, Gangs, Civilians, pretty much everyone they could find to try these drugs. Siz became impressed with Billy and James and started supplying them pills on a regular basis. Billy insisted that he only wanted to be paid in drugs and would give Siz 100% of the profits from everything he sold.

Billy managed to get Eddie Marshall to try these "gummies" at VLC during a car auction to which Eddie wanted more of these gummies. This resulted in a large majority of the staff at the tuner shop to hate Billy as he was "poisoning Eddie" and he started showing violent outbursts. Billy and James started supplying Eddie these drugs on a regular basis which resulted in Eddie stating he could get a Space Docker for Billy if he did some things for him.

Eddie told Billy he would need to acquire the following: 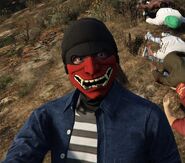 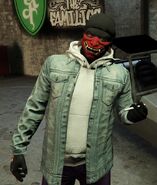 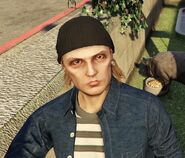