Bernice Caldershot is a character role-played by MOONMOON.

Bernice Caldershot is a member of The Guild. His Dungeons & Dragons character, The Shadowlord, is an Arcane Trickster. Bernice usually stays in character and announces every statement out of character by saying "OOC". He hates when people force him to go out of character and harasses unsuspecting strangers by LARPing with them against their will.

Bernice looks down on anyone who works and insults those that do as wage cucks and normies. This includes his party members who are employed at the Rooster's Rest. Bernice's mom pays for all of his expenses.

Despite his real family being alive and well, the parents and younger sister of his D&D character were killed by orcs, so Shadowlord fled to Waterdeep (Los Santos) to pursue a life of crime. He frequently recounts his sister's last moments, changing her last words each time to match the current situation.

Bernice wears a retainer, causing his speech to be slurred and full of spit. When taken out, not only does his voice change dramatically, but he also turns into Isekai Shadowlord who loves to work and appreciates his friends in The Guild to an extreme degree.

He is also known for wearing diapers and leaving them all over his room at the Rooster. Every new janitor at the Rooster's Rest is tasked with cleaning them up.

Currently, Shadowlord is on the run from the police and has been in hiding for several months. He last told The Guild that he was part of the Thieves Guild now. No one has seen him since. 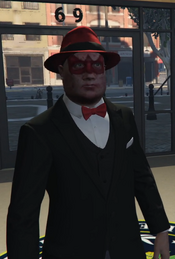