Baul Plart was a security guard at the Alta St. apartments. He spoke with a peculiar accent and often slurred his words when speaking to others. Baul Plart patrolled the plaza outside the apartments with his partners of F**k Off C*nt Security and caused chaos before his untimely death.

F**k Off C*nt Security was composed of four members:

The company focused on providing the citizens of Los Santos, high quality security and serving justice to offenders of minor crimes. Their long term goal was to eventually become members of the Los Santos Police Department and protect the city at a higher level.

The security company did not have the necessary funds to own a company vehicle. While golf carts would have been preferred, they couldn't be rented. Seeing that stealing golf carts would be against the law and very illegal, Baul opted for the optimal choice for the company: a stretch limousine rental. The vehicle was far from subtle and featured many seats to hold passengers and a sizable security force. 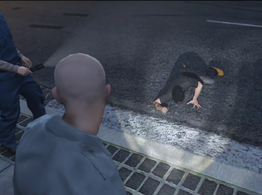 While patrolling around Alta Street apartments, Baul noticed a man laying on the ground in on the sidewalk of the apartments. The man appeared to be severely injured and was attempting to call EMS. Baul, however, ignored his pleas for help and decided to move the man into the middle of the street citing that the man was loitering on the property. The man insisted that he was a resident of the apartments and that he just wanted to go inside. Mr. Plart told the man that he was trespassing on private property and needed to leave.

Moments later, the man could be seen crawling back to the sidewalk to which Baul, moved the man further across the street, onto the train station. The man became increasingly upset that his path to his apartment was continually denied by the three apartment security members. The unnamed man was determined to get home and was found crawling across the street once more. Baul, determined to get rid of the man "disturbing the peace" placed the man in the limousine and drove him even further away from the apartments and deep into gang territory.

This was supposed to be the last time Baul saw the man, only to witness a gang member bring back the man to the apartments a few minutes later. Baul and his colleagues attempted to stop the man once more but were stopped by other citizens who realized the man was not being helped but harassed. The men were confronted and fled from the scene.

On their way to cause more chaos, Baul, Justice, and Andrew noticed a man moving at high speed on a bicycle in the middle of the road. The three men demanded the man to pull over citing the man for not using the bicycle lane. The man continually believed he was being robbed but the men clarified that they were "hired by the cops" and work for "Sam Baas". After some questioning, the man, whose name was revealed to be Fred Mossberg, became skeptical of the legitimacy of the security workers and called 911.

While waiting for the police to arrive, the men considered their options which included confiscating the bicycle or placing the man under arrest by striking him with their flashlights. Andrew opted for the latter option and charged at Mr. Mossberg, beating him until he was down. The police arrived at the same time and placed Andrew under arrest. In order to free Andrew, Baul and Justice quickly created a plan.

The plan was flawless. Except it wasn't. Justice was also placed under arrest. After speaking with the police for a while, the men were eventually let go. Instead of having charges placed, Mr. Mossberg opted to sue the men in civil court. Unfortunately, he wouldn't get the chance to do so.

Till Death Do Us Part 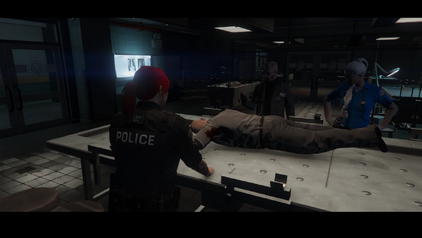 The Alta Street apartments were packed. The people needed order and the grounds needed security. Baul Plart, Justice Tyme, and Andrew Barbady return to the apartments. While the cops are handling a chase that ended in the parking lot, the security members do their part. They work to keep people from running, questioning random citizens, and significantly slowing traffic. Baul, during his work, managed to find himself in the middle of the street–not before being violently struck by a vehicle moving at high speed. Chaos ensued.

Nearly the entire police force responded with the most notable being officer Scarlett Winters. (See: Meeting Officer Scarlett Winters) Baul had no pulse and was unresponsive. He was rushed to the hospital and was declared dead. Baul was then taken to the coroners office for an autopsy. Winters spoke to the coroner and the EMT about Baul and told his story about how wonderful of a man he was. She also whistled as a nod to the whistles she provided to the security members when they first met. Below is an excerpt of what Winters had to say about Baul's death:

Imagine. . .you're born. . .screaming naked, coming into this world. Your mother, struggled to fight off her parents to have this child. The boyfriend or husband or whatever the f**k left her. She's like, "No, I'm gonna do this on my own". She brings this baby into the world. Comes out balls–just like him. Then she raises this kid. She works three f**king jobs to raise this child. Three f**king jobs. He's the apple of her f**king eye. She brings him up. He's a good kid. Teaches him all the right from wrong. He wants to be a cop. He wants to do good. He wants to give back to the world. He wants to give his kids a better life. And then he gets ran over by SOME F**KING CRACK WH**E ON THE STREET. *slams table* GOD DAMN IT *slams table again*. . .

Winters eventually found Baul Plart's colleagues (including Baul's replacement, Small Shart) and together they saluted, whistled, and poorly sang songs before sending him off to rest. Instead of having him buried at the cemetery, the company wished for Baul to be buried up North on a farm. The men then changed their minds and left him on the street in front of a wig shop, "as it said in his will that he wanted hair". The men gave one final whistle salute before leaving Baul Plart forever.

After being taken hostage by a group of bank robbers, Baul Plart, Andrew Barbady, and Justice Tyme, take the opportunity to talk to more police officers to establish their connections to the cops. During their conversation, Baul asks if the officers are offering ride alongs. The officers tell the men that officer Scarlett Winters is offering ride alongs–to Scarlett's dismay. While the other cops pursue the fleeing bank robbers, Scarlett talks to the men about being a cop.

The men eventually convince Officer Winters to let them ride. She reluctantly starts driving and heading toward the chase telling the security guards that she would likely get fired for having them ride along. Despite this, the men are overjoyed and ask if they could have police gear from Winters' patrol car to help if things go South. She declines but offers them each a whistle. Winters, with her three passengers, enter the high speed chase. Sirens blare and whistles are ringing in Winter's ears. They fly down streets and the men scream and whistle like little children but Winters herself enjoyed the antics. The fun had to come to an end as another officer spotted the men in the back of the patrol car and ordered Officer Winters to drop them off. Winters gives them a hug and wishes them well on their budding security career.

Chaos at the Casino

After already terrorizing the people of Los Santos, Baul Plart, Andrew Barbady and Justice Tyme, move to the casino to see if they can strike out big. The casino is quiet. The prize wheel of light sat in the middle of the floor. The three decide to wind down for a bit and drink. The men win very little but nearly hit the jackpot. During their time there, a man approaches the three to chat. Unbeknownst to the three, the man that they were speaking to was Mayor Denzel Williams. Floored by their discovery, Baul and Justice ask Denzel about the city's budget and attempt to convince Denzel to make changes to benefit the men in their career as future officers of the law. Denzel is amused by their antics but walked off to take care of other matters. Justice jokingly suggests that the men go and attack Denzel with their flashlights. Despite all they had done during their day in Los Santos, no one was willing to even touch Mr. Williams.

As they head to leave, they run into a woman who confronted the men earlier in the day and continue to displease her. When they head upstairs they find the car that belongs to the woman. The men debate and ultimately decide to vandalize the car by striking it with their torches. In doing so, Justice and Baul end up injuring Andrew. Instead of taking him to the hospital for help. Baul and Justice place Andrew in the woman's car and drive away. They hide in a nearby bush. The woman and her partners come out of the casino to find Andrew in their car and place him back on the ground and call EMS. They briefly go inside and Justice runs to place Andrew in the car again. The group, now suspicious that they were being watched, places Andrew on the ground and quickly drive away. As a final act of chaos, Baul guns down several locals before driving away in the rental limousine.

Baul and Andrew shine their flashlights and watch the injured man crawl back onto the sidewalk after leaving him in the middle of the street.

Baul dumps an injured man in the middle of gang territory

Baul, Andrew, and Justice question a man for traveling at 40mph on his bicycle.

Baul, Andrew and Justice being held as hostages for a bank

Baul at the moment of impact when he was killed protecting the Alta St. Apartments