Winston (given to him by Marco Holliday)

Planet of the Apes

Barry Briddle is a character role-played by UberHaxorNova.

Barry Briddle is a Caucasian male with a clean-shaven head and a two-tone mustache. He is a Ranger for the San Andreas State Park Rangers, Badge #278. He has sharp, protruding, aggressive facial features that include an extended brow ridge, comically long chin, and unusually wide lips. Many people in the city have called him a primate or a monkey due to these features. He talks with an inconsistent southern drawl.

Barry Briddle is a private investigator turned cop born in Boston, Dakota, but moved to Los Santos at an early age. He has no known relatives living in Boston, as he states that they do not exist.

He aspired to be a cop because when was a teenager growing up in Boston, as his neighborhood saw a lot of crime and drug usage. The day he chose to be a cop was when he made a makeshift police badge, walked to the nearest drug hotspot in his neighborhood, and flashed it to one of the people at the corner and then got stabbed. He swore that one day that fake badge of his would turn into a real one.

On the surface, Barry is very deadpan, this makes his fellow peers think that he is dull and unenthusiastic about most things in life. Though, when it comes to cop work he is very passionate and is dedicated to stopping criminals in their tracks. He is a fast learner and quick to adapt to new situations; he is also very detailed in his work (report writing, picture taking, etc.) making him one of the most thorough cops in the force.

He is also the butt of many insults and derogatory comments, especially concerning his physical appearance and blank demeanor. However, as he has become more well-known and the general public became more accustomed to him, the amount of comments about him have decreased drastically. In spite of this, or maybe because of it, he is able to clap back with witty and sassy remarks. Barry also believes in the paranormal and the unknown. He believes that ghosts, aliens, cryptids, and hypnosis exists, which makes some other officers think that he is gullible.

While working as an undercover private investigator/criminal informant by trade, he accepted work from the police and had to maintain his cover. His phone contact list was primarily filled with numbers of criminals and he kept his police contact numbers on a separate notepad.

After quitting CI work, he became a ride-along for the Police Department, riding with cops such as Jerry Perkins, Aaron Byson, and Sam Baas. Although, with the city becoming bankrupt due to the government going all in on GameStop stocks, the Police Department lost funding and was initially unable to give ride-alongs.

On February 6th, 2021 Barry applied to work at the Burger Shot managed by Kevin Whipaloo after he was informed that the PD was no longer giving ride-alongs. He worked the cash register and cooked the various foodstuffs sold to customers. He was one of the first new employees to be hired, and developed a long-standing feud with fellow employee Kenneth Foreman, who was hired a few days after him. He quickly become a favorite of manager Robert Spowylamywanowski, in part because of his loyal attitude and quick comebacks.

While working at Burger Shot, he delivered free donuts and coffee to the police department (after it was approved by Kevin) as a way to advertise the restaurant and set himself up in a positive light to the PD.

Additionally, his really primal facial features earned him the nickname of "Sasquatch" from his fellow coworkers and managers. This resulted in him almost getting hunted by Leslie Lingberg during a "delivery training exercise" set up by Robert Spowylamywanowski and Bradley Kickass. While working at the Burger Shot, his fellow employees even spread a rumor that he was a werewolf. Though these claims were unsubstantiated, the Night Shift Crew at the restaurant were hard at work trying to prove them.

In a convoluted scheme to escape the wrath of The Hunter, while also gathering intel on Kenneth Foreman, Barry Briddle planned to be "fired" from Burger Shot and then undergo bootleg sex reassignment surgery by an alternate persona of Leslie before being rehired under the alias "Marry Middle". Although the scheme was rendered moot when both The Hunter and Ken were made aware of his intention to undergo a sex change and that he wasn't really fired, yet he still decided to undergo surgery (with the one stipulation that his penis remained untouched). He received breast implants that were two apple pies wrapped in Burger Shot bags and potato "lip enhancements", but the surgery was interrupted when Robert fired his gun. That action attracted the police and led to the arrest of both Rob and Leslie, while Barry was taken to Pillbox Medical where the surgery was undone. Although the doctor that treated Barry decided to give him some "remnant ass cheeks" to stuff a bra with, allowing Barry to still go undercover as "Marry Middle".

Barry was awarded 'employee of the day' multiple times by Robert, the night crew manager at the time, and had been promoted to the rank of team leader before being hired at the BSCO.

When Barry became a cadet for the BCSO, he shifted to a part-time worker for Burger Shot. Since then he used his employment as an opportunity to steal food from the establishment and give it to his fellow officers and himself for sustenance. By August 2021 he was fired for inactivity since he hadn't come to work since he became a ranger.

On February 28th, 2021 the Police Department conducted a mass-interview session to all people who wanted to be cops. Barry was one of the interviewees and was interviewed by Anthony Copleone and Brittany Angel about his aspirations and how he would handle certain situations. After the interview was completed, Barry was given an interest form by Angel for him to fill-out and turn in to be accepted as a ridealong. And on March 3rd, 2021 he was given a formal interview by Brittany Angel and Domenic Toretti to gauge his interests, aspirations, situation-handling skills, and more. After the interview was conducted, he was allowed to become a civilian ride-along again while the PD went over his interview pending a decision to make him a deputy or not.

He was hired as a Cadet for the BCSO on March 11th, 2021 and passed academy on March 28th, 2021. During his time as a cadet, Mike Bayo referred to him a series of videos called "Verbal Judo", these series of videos teach people how to become better speakers and to become more assertive in the line of duty. He attained solo cadet status on May 4th, 2021.

During this time, he received a lot of praise from his fellow officers for his thoroughness, knowledge of SoPs and case laws, and overall actions as a cadet. Briddle even garnered praise from Jackie Snow, who suggested that he might be an FTO one day. Because of this, he developed a specialty for catching oxy runners. He caught about six of them during his time as a police cadet.

Barry's first arrest as a solo officer also resulted in his first bench trial as a solo officer. He ended up partially losing the case, with the defendant being able to drop one of the charges Barry brought against him. They both occurred on 5/5/21 and the presiding judge for the trial was Coyote Russel. However, on the following day after this bench trial, the charge "Sale of Drugs" (the charge that was dropped in the bench trial) was modified by the DOJ after numerous complaints by LEOs and the ADA, Barry found out through Daisy Dukakis.

While processing a burglar, Barry caught Theodore Tinker tazing a woman in the MRPD holding cells which caused her heart to explode and die at the cells. This ignited a rivalry between the two. He was also kidnapped and stabbed by two unknown assailants as retaliation against Snow, who supposedly put them in time out. After stabbing them they said to relay the message: Snow is falling. He has an ongoing healthy rivalry with the Littlemen siblings, Jim Littleman and Tim Littleman.

While a deputy, he had expressed interesting in patrolling in the northern part of the county. He had told his superiors many times that he does not care much for big city situations, such as races, robberies, or shootouts.

Once becoming full-deputy, he had intended to send an interest form to transfer to the San Andreas State Park Rangers after it was announced that they were taking in applications, per Conan Clarkson. While trying to become a ranger, Barry created survival items for the department to distribute as Ziggy Buggs stated that every ranger has created or offered something for the department. These items include maps, meal ready to eat (MRE), sleeping bags, etc.

On May 18th, 2021 Barry was formally accepted into the Rangers after he met with lead ranger Ziggy at the top of Mt. Chiliad. He officially became a ranger on 5/21/21 after taking the ranger final evaluation, which was to fight two mountain lions in hand-to-hand combat. Although the murder kitties downed him nearly instantly, Ziggy announced that Barry had passed, and was thus to be known as Ranger Barry Briddle.

Life as a Ranger

Barry and future officer Marco Holliday on a field.

Barry trying on a full police outfit early in his career

Barry as a Burger Shot worker

Barry under disguise as "Marry Middle"

Barry and the BCSO 1st Academy

Barry and the BCSO

Barry standing next to the "Fuck Bunker" 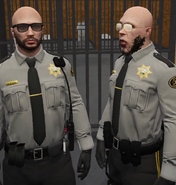 Barry with his coworkers and the District Attorney 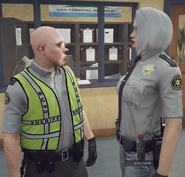 Barry immediately after being forcibly shaven by Mike Bayo 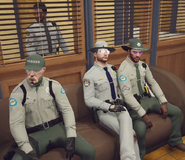 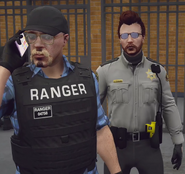