Bailey Jade is a character role-played by TinyStunt.

Bailey Jade is a Paramedic FTO of the Emergency Medical Services, call-sign Papa-1.

Bailey’s parents were both Military Nurses in the Army. She grew up very sheltered on base and often spent time in the ward volunteering and helping out where she could. One day there was an attack on the base and caused an explosion that unfortunately killed both her parents while they were at work. Bailey was devastated by this for years and coped with it by turning away from medicine completely. She instead tried to stay away from people in need and focused on getting a business degree. Until one day, she was walking to class and saw a motorcyclist lose control of his bike directly in front of her. The man slid across the road, falling off a bridge and landed in a shallow pond. She immediately found herself running towards the motorcyclist and carefully lifted his head above water to breathe and talked to him until help arrived. As the ambulance drove off in the distance, she stood there frozen staring at the sirens remembering the feeling she got from helping others. She realized right then that she couldn’t live in fear. Helping people is what she was meant to do, and she is determined to become a paramedic to help others.

Bailey then arrived in Los Santos and was determined to become a paramedic. After performing several ride-a-longs with a few EMS including Sam McEntyre and Mari Jones, she attended the EMS Academy. Bailey passed the Academy with flying colors and became a full fledged EMS trainee. Bailey was eventually promoted to EMT and after many weeks and dealing with a number of events, Bailey was promoted to paramedic when she completed CC training. She completed the rest of her training and was promoted to Lieutenant and eventually Co-Chief. She was in very short relationships with former judge Midas Campinetti and kind of with Steve En, but both ended quickly.

When Bailey first came to the city, she was very naive and trusted people very easily, never knowing a stranger in a sense. However, as she came to understand how the city operated and earning the friendships of Sarah Ableton and former EMS Chief Mari Jones, people with many secrets to hide and knew how the city worked, she lost a bit of the naivety and trusting, even though they still remain to quite an extent. EMS wise, she was very by the book early on, earning her the nickname, "The Blonde MJ" because of this. She eventually changed to be less by the book as she was impacted by changes in the city and how others interacted with her. Bailey's past dictates a lot of what she does, including the helping and caring for everyone along with partial naivety and trusting, sometimes this is detriment as this attracts dangerous stalkers and serial killers to come after her at times such as Jack Deadwood. Her girlfriend Daisy Dukakis has impacted her in that she thinks a little bit more then she used to when it comes to actions and the keeping of secrets away from people if needed. 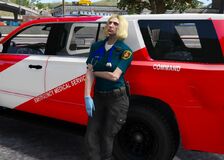