Ava Ridge is a character role-played by Kiwo.

Ava Ridge is a founding member of The Goths. She likes to write poetry on topics pertaining about death, darkness, and other grim topics. She also has a photographic portfolio, which mostly consists of self-portraiture. Ava's current alias is Curse, however she changes her alias as much as her hair colour. Although Ava believes in going against the establishment, she strongly believes in the correct use of force when it comes to encounters with Law Enforcement, she also believes in challenging the charges she is committed with. Ava believes that through verbal discussion and debate, that she can effect the police department more so, than violence. But violence helps too.

Ava's Instagram and Photographic portfolio can be found here.

Unarmed and Gunned Down

During April 27th 2020, Ava and Kaleb Rush were messing around and attempting to interrupt a prison transport of four members of the HOA, including Ava's boyfriend, Kray-Tor Skullfondler. The duo's attempt failed and Ava was subsequently sentenced to twelve months at Bolingbroke Penitentiary. A prison riot had taken place in the penitentiary prior to her arrival, and the Corrections Officers were recovering their lost equipment.

Two items were left unaccounted for, so the HOA and Ava decided to have some fun and run around the penitentiary yard while the Police Department were doing a sweep of the prison. Senior Officer TJ Mack spotted Ava so she surrendered, being searched and released back into the yard in the process.

Mack then began to chase down Kray-Tor. Kray-Tor tackled the officer, so Mack responded with his flashlight, beating Kray-Tor down. Ava's ride-or-die attitude towards Kray-Tor kicked in, she began to punch the Officer in an attempt to protect Kray-Tor. This caused Officer Mack and Senior Deputy Jerry Perkins, to warn Ava that if she continued she would be shot down. But, before she had a choice to step-down she was shot by both men, with automatic assault rifles.

Doctor Torah Andrews was on scene almost immediately. However, Ava was not wearing any form of vest or protective clothing. She was unresponsive, with heavy blood loss and multiple gunshot wounds throughout her torso. Doctor Andrews managed to stabilise and remove the shrapnel from Ava, who was then transported to the Intensive Care Unit at Pillbox Medical Center.

After coming out of ICU, Ava now is currently home, and playing video games. Because she does what she wants.

Ava looks up to her fellow goth, Phillip Martin (otherwise known as Crow), often impressed about how deep and edgy he is. The two appear to have had a relationship in the past. Something happened between the two, as Ava was concerned that there might be tension or awkwardness between the two of them. Their relationship as friends seems to be functioning healthily so far, despite Crow getting defensive when anyone flirts with Ava. Crow gets especially defensive whenever Ava talks to or flirts with Kray-Tor.

Dustin Manson (otherwise known as Dark Shadow) and Ava share a lot of mutual interests. They both like Tim Burton's movies, specifically the ones with a "goth aesthetic". They also both do not like Dark Shadow's brother's girlfriend, Rebecca. Dark Shadow had saved a copy of Ava's (tasteful black and white) lingerie photographs from her VampireFreaks account. Crow was not happy that Dark Shadow had done this and told him to delete them.

Wednesday Mushkin introduced Ava and The Goths to Kray-Tor Skullfondler. Ava was instantly impressed by how metal and sick he was, and it was not long until Kray-Tor was introducing the gang to Molotovs, Meth, Oxy and Marijuana. This only impressed Ava more, and she soon found herself developing a crush for Kray-Tor. Ava then invited Kray-Tor to many of The Goths' raves; while at one of their raves, Kray-Tor was seen spending a lot of time with Ava and defended her when a drunken Irwin Dundee called her ugly. Later that same day, Kray-Tor gave Ava his revolver, and let her shoot it at a boat. Ava received a text message on the drive back to the city from Kray-Tor saying:"ur cool". The two have since continued bonding through their mutual love of anarchy, explosions and drugs.

Their relationship hit a small speed bump. Due to some HOA related events earlier that day, Kray-Tor was sent to Bolingbroke Penitentiary. Ava was not happy when she found out, and managed to find Officer Peter Frost on his own in Harmony. Ava confronted the Officer about why Kray-Tor had been incarcerated. Frost refused to disclose the information, but instead decided to attempt to get underneath Ava's skin. Frost claimed that Kray-Tor had been seen macking on an unnamed gentleman, who was seen riding on the back of Kray-Tor's motorbike. Seeing red Ava pulled out the shank Kray-Tor had gifted her and stabbed the Officer.

She later decided to visit Kray-Tor in prison, to her dismay Kray-Tor had been "meme macking" on Corrections Officer Lydia Vale. Ava was not happy. She turned tail and left the prison, refusing to talk to Kray-Tor.

Later that day, Ava was pulled over during a traffic stop. She tried to act cool, but saw Officer Peter Frost in one of the approaching police vehicles. She fled, and called Daryl Dixon and the HOA for help. Ava listened to the words of Kray-Tor, and trusted in the buggy. The foolish Los Santos Police Department were no match for Ava and the buggy.

Even though Ava successfully evaded the police, Kray-Tor was not so fortunate, being apprehended in the process. After serving his time, Kray-Tor apologised to Ava and expressed how worried he was that he had lost her forever.

Despite previously being adamant that they are just good friends. The two have had movie nights together and on April 13th 2020, Kray-Tor gifted Ava a Dune Buggy, he has also expressed how much he cares for her, and that he is afraid to lose her. A few days later, on April 18th 2020, Kray-Tor asked Ava to be his girlfriend and they officially started dating.

Alex Marshall is a member of The Frat, who were previously at odds against The Goths, but have since resolved their conflicts. They first met at a midnight rave in Mirror Park. The Goths won the rave, resulting in The Frat pulling out guns. Alex's simp energy caught Ava's attention and they decided to go on a date. During the date, Alex's "alpha simp" showed as he suddenly started shooting cops during the date as Ava was attached to her OnlyFangs account, as she had just reached 400 OnlyFangs followers.

Ava has tried to tell The Goths that Alex is different and that he has a job and a financed car, showing how distinctive he is than the other frats. Soon Ava and Alex will be two simps united like a modern Bromeo and Ghouliette. Ava began to become frustrated with how little Alex replied to her text messages, this lead to her convincing herself that Alex might be cheating on her, and that she can do better than him. On April 18th 2020 she told fellow Frat Kaleb Rush that she was done with Alex. Turns out Alex wasn't different after all.

The Goths were met by Fiddler Tripps while having a rave underneath Del Perro Pier. He requested that Ava, Crow and Dark Shadow get in his van and each take a tab of LSD. While they were tripping he took the three to a secluded location and offered them to be his main distributor of LSD. The gang accepted and were given the first batch of LSD for free. Tripps was poignant in warning them that drugs were for fun, and not profit. He also, warned them that if anything were to happen to Ava they would all be in big trouble.

Ava went to the second pick-up for LSD on her own. She was met by an unhappy Tripps; a Draco in his hands. Ava had obeyed Tripps' order and sold the drugs for minimal cost. However, for one rave she decided to use Melbert Rickenbacker as a middle-man. (Melbert had bragged to Ava that he had made over $100,000 at the rave).

Tripps made Ava get onto her knees and take a tab of LSD that had been spiked to force her into having a bad trip. During the trip Ava was chased by two clowns that looked identical to Tripps, and she fell onto her knees pleading for it to stop. Tripps held the Draco to her head and asked her if she wanted it to go away, and if she had any last words. She asked for him not to hurt her, and he removed the gun from her head. Tripps has decided to trust Ava to be his distributor, for now.

Abe Ridge is the proud father of Ava. He often expresses his concern for her lifestyle and current decisions in life, but understands that it is just part of growing up and is a stage of her life. Abe recently returned to Los Santos after being away for business. On his arrival to town he was met by Ava and Dark Shadow. The three had a lovely time at Del Perro Pier, where Abe was subsequently given LSD and ran around the pier claiming that a clown was chasing him.

Abe was determined to prove to Ava that he was not a Greg. He saw Ava was hosting a party at the Mirror Park Tavern, he attended and was the DJ for the event. At some point during the night, Abe left the tavern and stumbled the streets of Los Santos, finding himself inside a parking garage. Ava alongside Kray-Tor, decided to go and talk to her father.

Suspicious of Kray-Tor's real age, Abe begun investigating the biker. He did not feel comfortable with his daughter dating a man over the age of thirty, and had suspicions that Kray-Tor was older than that. He was however, impressed that Kray-Tor owned his own business: "Kray-Tor Industrial Enterprise Limited". The two agreed to go out and play golf together.

While asserting her rave dominance, Ava participated in a dance battle against her soon to be best friend, Kaleb Rush. Whenever Ava is not with Kray-Tor she can always be found with her partner in crime, Kaleb. The share common interests such as: drinking, recreational drug use and causing mischief. Kaleb is one of two people Ava has expressed genuine care and concern for, the other being Kray-Tor. 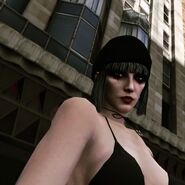 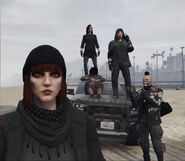 Ava with The Goths (First Day) 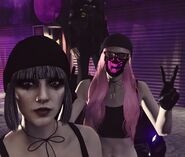 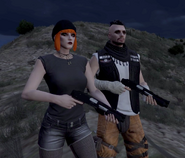 Ava attempts to save the HOA 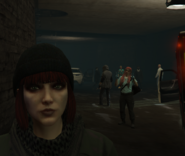 Ava's First Day in the City