Arush Patel Santana is a character role-played by SayeedBlack.

Arush Patel Santana, known as "Speedy" he is the Leader and an OG of the Vagos.

He is very violent but very loyal to the people working under him. He has a close relationship with many criminals around Los Santos.

Speedy was recruited by Jesus Garcia (the leader at the time) to the Vagos, and was a soldier under Jesus' leadership. After Jesus was killed, Lil Loco took over as leader of the Vagos, until he disappeared for reasons unknown.

Leaving Speedy as a one man army, he became the Leader (El Jefe) and has rebuilt and expanded the Vagos since.

Speedy is known for his 2 sides. Speedy takes after his mentor, Nino Chavez, in the way he conducts business and how he is always 2 steps ahead of his opponents. Speedy is respected highly in the southside for his diplomacy and business deals.

Although Jesus is dead, he had major influence on Speedy as the one who recruited him into the Vagos.

Lil Loco was recruited to the Vagos by Jesus Garcia, alongside Speedy. They have a close relationship and are both OGs of the Vagos.

Speedy and Buddha have a very close relationship to the point they're almost like brothers. They've known one another for years tracing back to the OG Leanbois days where Speedy saved Lang from the cops which resulted in them solidifying their relationship to which has close to the current day. Currently they are both in the Weed and Meth business where they have a mutual agreement where Buddha sells Weed from his Dispensary in return Speedy buys Buddha's Meth.

Nino looks at Speedy like a son. Speedy and Nino have a relationship that goes back years, and Nino has taught Speedy a lot in business deals and ways to conduct himself.

Speedy's cousin and member of the Vagos.

Speedy has a soft spot and has described Siz as a little brother to him and if anybody tries to hurt him then Speedy will hurt them ten times harder. Siz is an ally of the Leanbois and a secret shadow 2nd of Command in Vagos. Speedy was one of the first people that helped Siz in his early city days, and helped shape who he would become outside of Mother's Family. They first met when Siz was in his rejuvenation suit at the Gas Station near Grove Street and asked if he wanted to rob a bank while Speedy was wearing an mariachi outfit.

Speedy and Eugene have been close friends for a long time. When it comes to doing jobs Eugene is one of Speedy's top picks.

Recently, Speedy and Sven "Seven" Snusberg have become extremely close associates, doing most of their criminal activity together, and forming a friendship that is now growing closer by the day. From Hunting, to Impersonating Officers of the Law to Robbery, Seven has taken the mantle of Speedy's right hand man, helping him start his fruit empire and making a bloodoath to become millionaires together. They can be seen driving around the city in Speedy's van together more often than not. 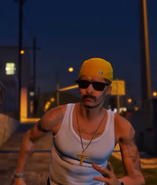 Speedy in his mariachi outfit 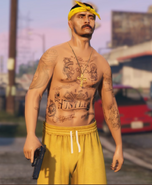