Grognak The Destroyer, Attorney at Law

Anthony Murphy is a character role-played by BoschMerchant.

Anthony "Anto" Murphy is an Irish criminal and member of Chang Gang and the Top Shottaz. He is a previous HOA member and also used to be affiliated with the Prune Gang, since he lived on Prune Street.

After arriving in Los Santos, Anto settled in the South Side and became well acquainted with various gangs throughout the area. He was generally well liked by most and due to the relationships he developed with people from different gangs, he was very hesitant to declare his allegiance with any gang in particular for a long time.

Anto eventually joined the HOA, as he became very close with one of the groups OG's, Kray-Tor Skullfondler. He spent a few months with the HOA before he was caught stealing access codes for a Trap House the HOA was protecting.

He was asked to get the codes by Mr. Chang who grew quite fond of Anto, despite the fact he was not an official member of the Chang Gang. Mr. Chang wanted to gain control of the Vagos Trap House and thought Anto had the ability to help him do it. It took much deliberation, as Anto knew how much was being asked of him and what was on the line but he eventually agreed to do the job. When he was caught he refused to give up Mr. Chang, and as a result he was tortured and exiled from the HOA, hugely damaging his relationship with Kray-Tor in the process. As of November 25, 2019 he is no longer affiliated with the HOA, or his pinkie finger. However, he has since slowly rebuilt his relationship with Kray-Tor.

Anto returned to the rogue lifestyle, but before too long he started to spend a lot of time with Top Shottaz leader Wayne Biggaz. They quickly formed a close relationship which culminated in Anto joining the Top Shottaz and running a Trap House with Wayne.

They have a goal to eventually leave the South Side of the city due to the heavy gang conflict in the area. 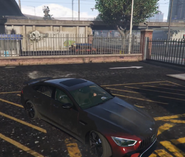