Annie May is a character role-played by Ashi.

Annie May was a Cadet for the Los Santos Police Department, Badge #575.

Annie May is a 21-year-old girl from "California, Japan." Her most notable features are her pink hair, wedding veil, and her bubbly anime-inspired voice. She also occasionally dons a pink anime-inspired mask. Despite the fact that her name sounds like "anime" and she utilizes Japanese words and sayings frequently, Annie May does not watch anime.

Annie loves to meet new people and has no problems approaching strangers, usually to ask if they would like a Uwuber ride. Even with her sweet disposition, Annie has a penchant for getting herself into troublesome situations with others, usually by being a victim of circumstance. She is a big proponent of positivity, and frequently utilizes positive reinforcement to help boost other people’s confidence. Making other people happy is a priority to her, often sacrificing her own wants in order to please those around her.

She has also demonstrated an eagerness to defend those she cares about, sometimes even brandishing her hatchet. Her main goal in life is to find a loyal husbando and be a good waifu.

UwUber Enterprise started with UwUber, Annie May’s taxi service that features free rides to anywhere in Southern San Andreas. The primary method of income for UwUber comes in the form of tips, which can be anything from cash to items, depending on what each passenger would like to pay and all the cars used for the service is stolen.

On some occasions, Annie utilizes guilt trips in order to garner better tips, most notably telling passengers that she is saving up for her wedding, despite the fact she is already married.

UwUber Enterprise has other services like food delivery ("UwUbernoms"), UwUberZoomies, UwUberPremium for better and faster service and UwUberouchies to help transport injured pedestrians to the hospital.

Annie was introduced to Humberto Antonio Donato “Don” Pecorino by the Nerds at the Rooster’s Rest. Don agreed to take Annie out on a date, and even drove her in a stolen supercar to impress her. The pair were pulled over by Trooper Andrews and Sheriff Cornwood for speeding and they gave Don and Annie two choices: either agree to be married right there under the highway underpass or go to jail. The two agreed that getting married was the better of the two options, and thus were wed while still remaining in cuffs. Sheriff Cornwood performed a song afterwards for their reception. Don and Annie’s honeymoon consisted of getting drunk on absinthe and driving around Los Santos together looking for managers at general stores, presumably to rob.

While the two haven’t known each other for long, Don avenged Annie after Patrick Downing shot her in the head and proceeded to dislocate Winifred “Winnie” Bodooge’s jaw. This resulted in them losing their hug virginity to one another. Annie also competed in (and was the winner of) the “Love or Roost” event which featured Don as an eligible bachelor.

On March 27th, After Annie May raced her first race with Don (finishing in 6th place!), they shared an awkward first kiss outside of the apartments.

Annie confronted Don on March 29th about Lang poisoning her, after getting out of the hospital with a concussion after an altercation at Burger Shot. Don promised Annie that he would make it up to her and be a better husbando. Since then, Don has taken Annie on a few oxy runs and have been spending a bit more time with his waifu.

Burt "Gloryon" Pecorino is the adopted son of Don Pecorino and Annie May. They frequently spend time together and have only gotten closer since the adoption. Gloryon sometimes rides along with Annie in her Uwuber and offers lots of support/love to his adoptive mother.

Gloryon typically looks out for Annie and tries to fix situations that she gets herself in (trying to give her advice about dealing with Lang back when tensions were higher, and he also came in clutch when she got stabbed by 'Shia Labeouf').

Annie and Yuno met while Annie was doing Uwuber. Typically, Yuno utilizes the free rides as he usually cannot afford to pay - though as of late, he's given her some marked bills as payment. He loves introducing Annie into the crime scene: she has been his getaway driver, has robbed houses with him, and has done more than one oxy run with him. Annie has also provided Yuno with positive reinforcement (specifically regarding his looks and his subpar driving).

Annie met Winnie while looking for Uwuber passengers outside of the apartments. Despite not really needing a ride, Winnie accepted the offer and became Annie's ride-along partner. The two were bonded quickly, especially after Uwuber gave the Mayor and her bodyguard, Patrick Downing, a ride to the car rental place. After a successful drop off, Annie tackled the Mayor in hopes of helping her and was shot in the head. Winnie, hoping to avenge her new friend, challenged him to a fight and had her jaw dislocated.

After leaving the hospital, Winnie, armed with Don's brass knuckles, assisted in getting revenge on Patrick.

Donna and Annie May first met at the Casino. Initially, Donna was hesitant to believe that Annie's heart was in the right place when she married Don, but was quickly won over by Annie's charms. She gave Annie a makeover, dressing her in "Hoboken chic" fashion, which was basically her own fashion but flipped, and taught her how to walk 'heel-toe-heel-toe.' After showing off her new look to Don, Donna and Annie May decided that they were also best friends.

Don Sr. is Annie's Father-In-Law. The two have yet to meet.

Annie May met Lana near the apartments and things quickly got tense after Lana found out that Annie got married to Don that day. The hostility began when Lana called Annie the “walmart version” of her due to the two sharing similarities in appearance. Lana later twatted out “I’ve got murder on my mind…” which led Annie to be on edge. It turned out that Lana had been on some dates with Don in the past, which Don failed to disclose prior to the marriage.

On another instance, the two of them had an argument outside of the Rooster's Rest wherein Annie May pointed out that Don must've not wanted Lana, which greatly upset Lana. Since the argument, Annie May has demonstrated anxiety when Lana is around. However, the two have begun to be indifferent to one another and respect each other's space. They have even grown friendly towards each other, though Annie still remains cautious when Lana is around.

Annie May gave Tori an Uwuber ride after her car was stolen. They have also spent some time together in and around the Rooster’s Rest and are on good terms. Annie was also Tori's ride-along during some races on March 23, 2021 and have gone on a few fishing trips together.

Annie May and Lang are acquaintances at best, connected through Don. Annie found out that Lang is the person behind her poisoning at the Rooster’s Rest and confronted him outside of the hospital on March 29, 2021, where he confessed his love to Don. She maintains caution when Buddha is around, but doesn't really outright dislike him, as it goes against her kind nature.

The ordained minister for two of Annie’s marriages -- Baas and Pecorino.

A part of the reception of Donnie and Annie’s wedding. He sang “Let ‘Em Know” by The Longway Corn Boys as entertainment.

Annie May and Joe Caine originally met outside the Bahama Mama’s club in Los Santos. Joe married Annie on a whim after a night of heavy drinking. Jordan Steele presided over the ceremony, on the street outside Bahama-mamas. The next morning, Joe had forgotten his wedding to Annie May but the two made a decision to give married life a chance. He bought Annie a sports car, gave her keys and a management position to his business, and spent a lot of time with her. Eventually they grew apart as Joe would take frequent vacations. The two separated when Annie discovered that he loved to “fuck loads of bitches” on vacation.

Sam Baas is a Senior Officer for LSPD who arrested Annie for getting into some trouble behind Burger Shot. While Annie was in handcuffs, she asked Baas to be her husbando, which he agreed to. Baas proposed to her with a "ring" that was actually a hair tie.

When Annie meets Baas later at Burger Shot again, he reveals that his proposal was merely a joke in order to make Annie May feel better. Trooper Andrews, who was also at the scene at the time, coerces Baas to have a wedding with Annie in Burger Shot in front of all of Baas' colleagues and some Burger Shot employees. Baas immediately passes out from embarrassment and is sent to Pillbox Medical Center.

Baas tries to stage his own death and assume the identity of "Officer Aas" until Annie notices his fake beard and the name tag on his uniform. Baas begs Andrews to get him out of his marriage with Annie. Annie agrees to a divorce if Baas helps her find her a new husbando, and the two go their separate ways. 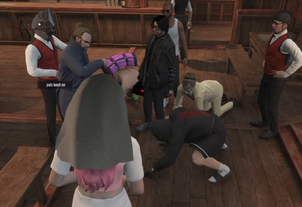 The Nerds introduce Annie to Don (and to puppy play). 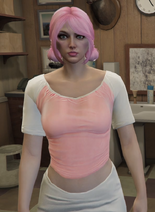 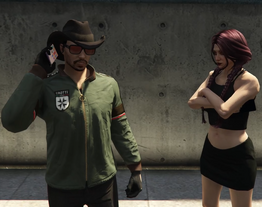 Don and Emo Annie during a marital dispute 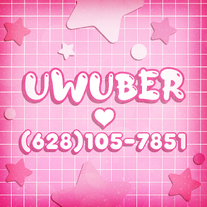 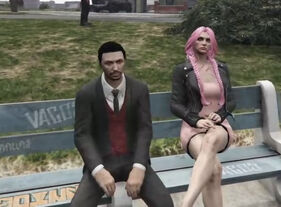 Annie May and Don Pecorino 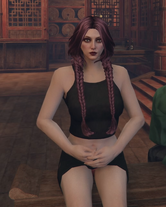 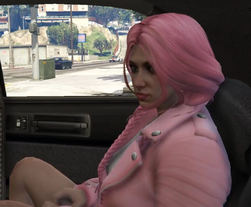 Annie May in Don's cab 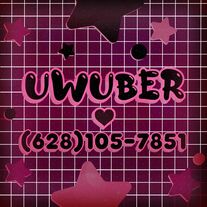 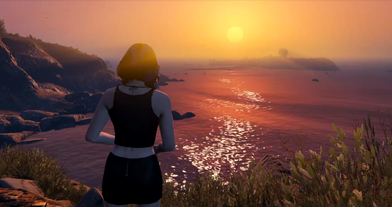 A heartbroken Annie May, in her emo phase, looking out at the gorgeous setting sun 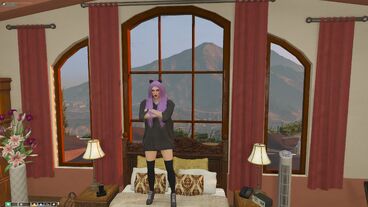 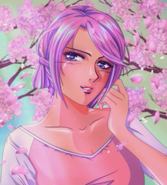 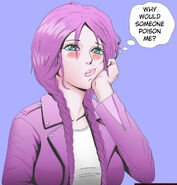 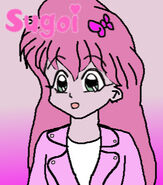 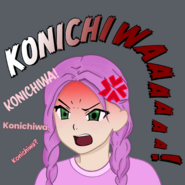 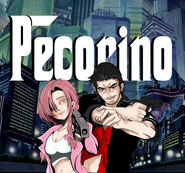