Anita May is a character role-played by Cathie.

Anita May is a Lieutenant for the Paleto Bay Sheriff's Office, Badge #355.

Anita is a 30-year old Caucasian female with red hair and blue eyes. Her hair is naturally black, but she always felt really odd about her dark hair and blue eyes, so from her early teens she started dyeing it red. Her hair is generally long, either in a rose braid or just completely loose. Occasionally you can find her hair in a bun if she is either working out or in the lab.

If someone meets Anita for the first time, one of their first impressions is that she is someone nice, as that is always the image that she wants to share. She can be cheerful and approachable to people, but sometimes she can also be extremely overstressed and come off the wrong way.

She can be extremely persuadable and naive, especially when it comes to getting social queues of people hitting on her. She believes in the better side of everyone until they show her that she’s wrong, but she doesn’t give second opportunities to those who have wronged her in the past. This quality was one of the things that made Anita become so close to some of the lifers in the Department of Corrections during her employment there. One of the things that scares Anita the most is feeling that she has been abandoned or losing someone that is really close to her, which is why she holds on to her friends as much as possible.

She aspires to always do and be better, works really hard to prove that she deserves the ranks that she’s been granted, and has always been someone that wants to teach and guide others. From early on in her career, Anita has always worked towards being a Field Training Officer, which she obtained quickly, and developed to be one of the heads of the Personnel & Training Division in the PD and a Lieutenant in the Paleto Bay Sheriff's Office.

Anita was adopted from a very young age, causing her not to know anything of her biological family or background other than she has a younger brother named Timmy May. They had no contact until their adulthood when Timmy went to look for Anita and found her in San Andreas where she took him on a ride-along once. She grew up being supported and loved by her adoptive family, which made her never want to look for the family she felt abandoned her.

Anita got the opportunity to embrace a position in the Department of Corrections as a Correctional Officer, and as someone that believes in the best of people and that people can indeed be reformed, she accepted this position as the start of her professional career.

Once hired for the Department of Corrections, Anita was very comfortable as a CO. She made a lot of friendships with some of the lifers, Quinten “56” Palmer and Marcus Jackson, and with other colleagues. But as she quickly realized, she couldn’t change the lives of anyone that would pass through Bolingbroke Penitentiary. Anita felt lost for a few months without knowing what to do or move forward with her life until she met Henri King. Their relationship quickly developed and they found company in each other in such a lost place.

After several months working for the Department of Corrections, and watching everyone that she was working with move forward for the PD, Anita decided to work towards a future towards the Los Santos Police Department. She always told herself she’d be a city cop, until Henri King joined the Blaine County Sheriff's Office, and changed her mind.

After obtaining the rank of Field Training Officer in the Department of Corrections, Anita worked closely with Daisy Dukakis and Sher Singh to hire and train different COs.

In September of 2020, Anita received an invitation to attend an interview to join the Unified Police Department. After receiving the email, Anita went on duty and saw Trooper Andrews. He asked her if she had an interview scheduled, and she said yes.

She was then invited to join the academy, where she passed and joined the Blaine County Sheriff's Office as callsign #526.

During her cadet phase, her main Field Training Officers were Brian Knight, Sam Baas, A.J. Hunter, and Johnny Divine. She still says that she is the Deputy that she is today because of all of them.

On the December 15th, Anita was kidnapped by the Lost MC and they forced her to change her hair color to blonde and cut her hair short, to be a “Karen”. A few hours after the kidnapping, Anita was fully promoted to Deputy, Badge #355.

After the restructure of the PD in February of 2021, Anita kept her rank of Deputy in the Blaine County Sheriff's Office and continued working to prove that she could be a great asset to the PD.

In March of 2021, Anita heard that the P&T department, led by Brittany Angel and Domenic Toretti was looking for officers that would be interested in being Field Training Officers. Anita approached Angel and told her about her interest, where Angel questioned Anita and was surprised by her knowledge. After the test with Brittany Angel, Anita and Ben Casanova were promoted to Senior Deputy/Officer and assigned Shift 2 Field Training Officers.

Anita's continuous work as one of the most active FTOs for Shift 2 allowed her to progress very quickly, where she was promoted to Sergeant for the Blaine County Sheriff's Office and a Recruiter in the Personnel & Training Division in May 2021. Anita still feels that she wasn’t fully prepared for a Sergeant position and it was one of the most challenging positions for her to adapt to.

Several months after being appointed a Recruiter in the Personnel & Training Division, Brittany Angel and Domenic Toretti moved towards an Advisor role and passed the leadership of the division to Anita May and Matthew Espinoz. They are the current leads of the P&T and main recruiters for the Paleto Bay Sheriff's Office.

On the October 31st, 2021, Anita decided to disguise herself as Sheriff Kyle Pred for Halloween, where she fully embraced being Anita Pred and played the part. While at the Casino, Anita Pred passed by Kyle, dressed as Bob Smith, where he told her “Hey Pred, don’t forget to promote Anita to Lieutenant”, confirming to Anita that her promotion was upcoming. Later in the meeting, Kyle Pred, dressed as Anita, was promoted by Anita, dressed as Kyle Pred.

Currently Anita focuses on splitting her time in the Street Crimes Unit as an Advisor and recruiting/teaching cadets.

As a Detective she concentrates on investigating several Serial Killers. She believes that she has the greater responsibility of taking these killers off the street, to protect those she cares about and civilians of the city. 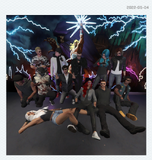 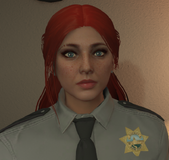