Smoke on the Water

Born in Canada, while his family was on tour, Angus Oblong II hails from a prestigious polish clown family that toured the world. Angus is a graduate of Barnes and Bailey Clown College, graduating with a degree in Gymnastics and adopting the stage name "Bozo the Clown" for his professional career as a clown. Bozo was well known for his television stardom during the late 2000's, having moved to Vice City to pursue said television career. Corrupted by the Vice City nightlife and stardom, Bozo became heavily addicted to drugs and strippers. Towards the end of Bozo's television career, things took a turn for the worst when the I.R.S seized all his assets and belongings. Charged with tax evasion due to his failure to pay his taxes and ultimately was forced in to making a plea deal in which he served 6 months in jail. 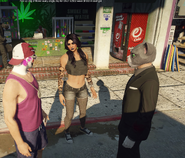 Retrieved from "https://nopixel.fandom.com/wiki/Angus_Oblong_II?oldid=121009"
Community content is available under CC-BY-SA unless otherwise noted.