In an exclusive relationship

Angelo Luciano is a character role-played by PainInDiazFTW

Angelo is a street smart, smooth talking and charismatic businessman. Known for his striking grey eyes, alluring voice, well groomed beard, and Hype Beast fashion sense... you can tell by looking at him that he’s from NYC. He’s been called very handsome and “Pretty Boy” on several occasions. He’s also a sports enthusiast and loves chopping it up with the boys when it comes to sports talk, especially Mr. Lang about their love of LeBron James. He’s become a serial entrepreneur, starting new businesses to see where they’ll go and what will stick. He owns multiple businesses including a Sports Betting company, bee-wax & honey business as well as an oil business that he co-runs with his girlfriend Maia Berkeley.

Born to a Dominican father, Carmelo, and a Trinidadian mother, Angela, Angelo “Gelo” Luciano was born and raised in Brooklyn, NY with his younger siblings Nicolas & Gabriella (who he’s fiercely protective of). He is his father’s right hand man, and heir to the “throne”. His father; a consigliere in The Camorra is a powerful Businessman/Lawyer, and New York City royalty. Between his father and his uncles they own most of Brooklyn and Miami. And his mother is a socialite and fashion designer. Angelo started off as an enforcer in the family business; collecting debts and “Painting Houses” while working for his family’s real estate businesses. His mother did not like this career path, and took her son under her wing... teaching him to be a smarter intimidator rather than a violent one.

Even though he’s a bit rough around the edges, he’s become a really good business man and was instrumental in brokering most of the Family’s deals... By force but it was effective. Quite the charmer with the gift of gab.. Angelo became a social bug within circles of very powerful people. Known to most by his well dressed demeanor and dry sense of humor... he’s become a celebrity. He’s a serial entrepreneur dipping his toes into many business ventures, opening clubs and restaurants along the East Coast. College educated and street smart, he knows his way around a deal. 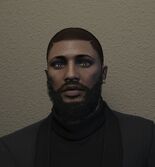