Andi Jones/2.0 and Prior

Andi Jones is a character role-played by Kiva.

Andi Jones is a soft-spoken woman; she is usually quiet, but was being built up by Kray-Tor as a stronger person who will, one day, stand up for herself. Kray-Tor was the one of the first people she met in the city and they’ve been close friends ever since.

Though she may be a soft-spoken woman on the outside, she is a highly productive, persuasive, and (sometimes) ruthless businesswoman. When she is in business mode, she is fierce and will do anything in her power to achieve a business deal.

Andi was brought into the HOA by Kray-Tor Skullfondler as a hangaround. The members of the HOA immediately accepted her presence (totally not because she is a woman) and treats her as their younger sister. Andi became a patched-in member of the HOA after she received her kutte on late August. Andi does not participate in any of the HOA's criminal activities, but has some knowledge of their actions and operations.

She handles the business-aspect side of the HOA since she does not engage in any sort of active criminal activity with the group. She helped the group attain legal ownership of the Mirror Park Gas Station with her business proposal and persuasive efforts. She puts out advertisements to promote the newly-owned gas station and she makes an effort on interviewing and hiring people to work there, too.

On July 18th, 2020 she was offered to sign onto Gno-Mercy Records records after she played the songs she made for Kray-Tor and T.J. Mack, but refused because of her distaste of the terms of the contract.

Andi became the manager of Tequi-la-la after Matthew Payne purchased it after he heard her sing. She has reopened the establishment to host events for the city of Los Santos and to turn it into a venue that can be rented out by record labels to host their own events. Tequi-la-la is intended to be a neutral ground.

During her time managing Tequi-la-la, she has been a target of numerous racketeering and extortion schemes ran by The Russian Mafia.

Andi became the new owner of the Mirror Park Gas Station after she wrote up a business proposal to the Department of Justice to persuade them to give ownership to Andi, and by virtue, the HOA. While under new ownership, Andi has begun the hiring process and has made an effort to make this place into a running business next to the HOA Tavern. She made Thad Owens the acting manager of the business, but soon after, replaced him with Roddie McGristle.

Skittle Street Gas Station, previously known as Grove Street Gas Station, is a LTD Gasoline convenience store located on the corner of Grove St. and Davis Ave. It was "owned" and operated by the East Side Ballas and their associates before Andi Jones officially purchased it from the local owner on 12/8/20. Though, it was seized on 12/18/20 by the State.

Though not the owner of this establishment, she is one of the many employees that help run this place. She works as a bartender and sometimes the occasional manager.

Andi is currently being stalked by a mysterious figure called “The Chicken Man”. The suspect is described as wearing a brown letterman’s jacket and wears a Chicken mask.

Now a cult associated with The Chicken Man has been stalking and hunting Ant. She had been kidnapped multiple times and witnessed many of her friends sacrificed by the cult. Though, this cult has been quiet for the past few months and there has been no sighting of this illustrious Chicken Man.

During her stay in the city, Andi has attracted various groups of people ranging from different backgrounds and personalities. She has a knack for doing this because people see her kind and naïve personality as a approachable (and sometimes exploitable.) She has attracted cultists now she has attracted the attention of Imperium and a collective group of serial killers due to her willingness to help Jasper Saxon, a former serial killer, on his upcoming court testimony. She has ran to Sam Baas and Brian Knight to find a way to get the killers and potentially Imperium off of her back and she also asked Manny McDaniels to assist her in ways to handle this problem.

With the death of Chasity Dawes she feels that it may have caused a domino effect and unleashed many other serial killers.

After Jasper Saxon broke his promise to her to stop hurting people, she quickly and fully returned to Baas' side, wanting to aid in his capture. Recently, he has agreed to work with her to finally bring him to his end. With the death of Jasper at the hands of the PD, his terrorizing grip has finally let loose on the city and Ant can be at ease. 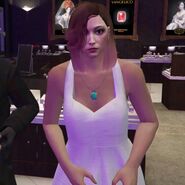 Andi during a jewellery store robbery with the HOA 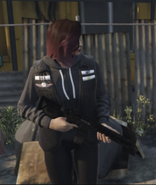 Ant holding a PD AR , given by Clarence

Andi with the Chicken Man

the view from Andi's backyard
Community content is available under CC-BY-SA unless otherwise noted.
Advertisement