Andi Jones is a character role-played by Kiva.

Andi Jones is the second-in-command of the HOA and the CEO of SA State Contracting. She previously served as the mayor for two terms.

Andi is a 28-year-old woman with light blonde hair, light blue eyes, and splattered freckles across her face. Her hair is typically hanging down to her shoulders, but when disguising her appearance, she has it in a ponytail. Previously, her hair was a light brown with dyed pink ends, but she has kept it dyed blonde.

Unknown to most, Andi has had both of her ring fingers replaced by those cut off by a local woman. This was due to the Chicken Man, who chopped them as a “lesson” for her to learn.

Her outfits consist of a wide variety of jackets, pants, shorts, and hoodies. Included in these outfits are her kutte, a pair of glowing shoes, or boots.

Andi is typically a soft-spoken and kind woman. She is smart and quick-thinking, and has made many connections with others groups and individuals. She once had a goal to help out the city and the inhabitants as best as she could and achieved the role as mayor to do so, but upon earning the role, it only made her feel as though no one truly deserved her help.

During her time in the city, Andi has had many experiences and troubles that have influenced her personality. This had led to her being more cold and confident in herself.

Andi was brought into the HOA by Kray-Tor Skullfondler as a hangaround. The members of the HOA immediately accepted her presence (totally not because she is a woman) and treats her as their younger sister. Andi became a patched-in member of the HOA after she received her kutte in late August of 2020, before the economy crashed. Andi did not participate in any of the HOA's criminal activities before, and has knowledge of their actions and operations.

She typically handled the business aspect of the HOA, since she rarely engaged in any criminal activities and had acted as a bartender/manager for the Mirror Park Tavern previously. She used to helped with meth operations when needed as a look-out but, now, she is primarily looking for ways to earn money, weapons, etc. for the group. She also helps push IZH-81 shotguns on behalf of the HoA.

On the 13th of August 2021, Andi was officially made a member of HOA High Command as she was browsing the new clothing items. With the ascension of Julio to High Command, this consolidated her position to Second-in-Command and Siz's right hand. She also acts as the head/OG of HOB as she handles recruitment and approval of would-be HOB members.

Andi is currently being stalked by a mysterious figure called “The Chicken Man”. The suspect is described as wearing a brown letterman’s jacket and wears a Chicken mask.

Over the past few months from arriving in the new city, the Chicken Man has made small appearances. The first events were stalking and texting Andi as she was fishing and a few weeks later chasing her from Paleto to MRPD, saying he'd be seeing her soon.

The third appearance was at the observatory, where she spotted him watching them from above. He began following and watching them from a distance, even attacking Gumbus in the HOA Tavern and later in the chicken factory as a sacrifice. Andi, Stag, Bjorn, Kitty, and Freddy were pursued by him in his muscle car shortly after the sacrifcice. Freddy was knocked out of the trunk and brought to a hill by the Chicken Man, where his finger was cut off, and he was retrieved by the four. The chase continued, eventually leading to their attempt to lead the Chicken Man into a trap, but ultimately blew themselves up with a tanker. This knocked down Kitty, Bjorn, and Stag, leaving Freddy the only one standing. The Chicken Man took one of Stag's (reattached, but eaten?), Kitty's (reattached), and Andi's fingers and left shortly after. Andi was previously missing both her ring fingers, but has replaced them with other woman's fingers.

The Andi Jones Crime Family: Andi (second from left) and decoys the day of the Block Party

Andi holding an AK infront of the Iron Thrones 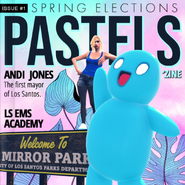 Andi Jones on the cover of first issue of PASTELS 'zine 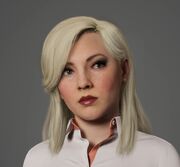 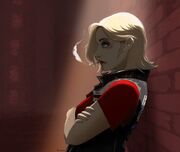 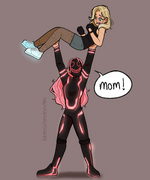 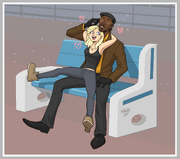 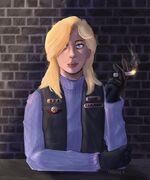 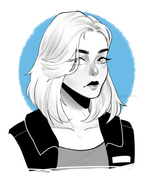 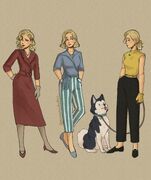