Critical injuries due to vehicular accident

Amara Harte was a character role-played by RemiTheSiren.

Amara Harte was a former Paramedic with the Los Santos EMS. She specialized in CRT (crisis response) and critical care. Naive and awkward, Amara was quite flirtatious with both men and women, although she preferred women. She was also very attracted to “crazy” people; the crazier the better in her mind.

Amara had a hero complex, in that she enjoyed saving others, and also being saved. Amara had a twin sister named Lily who is also in the city. They were quite close growing up, however, they drifted apart in later years, and rarely talked unless Amara was in dire need. Amara considered herself as the “good twin” due to Lily’s criminal background.

Amara was beloved by most people of Los Santos, criminal and civilian alike. She was affiliated with Mother (Evita Nimm) and Jacob Harth, and at one point was slated to be their own personal “dark” medic. However, these plans fell through due to CID investigations, and other factors. She was on Bovice Wilkinson's "Kill List", and also had a good relationship with Yung Dab, as she sold cocaine for him briefly.

At the time of her death, Amara was a Doctor in training (Resident) at Pillbox Medical, with the intent of being in the city of Los Santos more often.

On December 31st, 2019, she got into an arguement with Tessa Lamb which led to her to angrily drive off. Subsequently, as a result of her reckless driving, she was involved in a vehicular accident which led to her being admitted to the ICU. Several days later, on January 3rd, 2020, she succumbed to her injuries at Pillbox Medical Center, under the care of Andrew Ducksworth.

On Amara’s first day in the city, she met with Yung Dab, and sold cocaine for him on the streets. Dab commonly referred to Amara as the “best pusher he had ever had.” This was short-lived, however, as Amara became a trainee EMT soon afterward, and retired her drug-pushing ways.

However, after The Gnomes became prominent, Amara showed sympathy toward them. She did not like how the DOJ and Judges conducted themselves, and sympathized with the movement.

Amara became close to Mother during Mother’s time as a temporary receptionist at Pillbox Medical. Amara enjoyed spending time with Mother and her family, both on and off duty, and wanted to make sure that Mother was always taken care of and safe. Mother helped to connect Amara with Jacob Harth, who asked Amara if she would be okay administering medical aid under the books, as well as if she would be willing to deal drugs for him if needed. Amara agreed, mostly to giving medical aid, without telling the police.

Soon afterward, Kai King (who was close to Mother) found out that his life was in danger, and started pushing away Amara and Mother, fearing for their lives in connection to his. Amara and Mother met in Shady Shores to discuss King’s situation, and Amara also wanted to speak to Mother about what Jacob asked from her. Amara was on duty during this conversation, and noticed that an undercover officer was hovering around them. Amara subtly warned Mother about someone eavesdropping, and left. Soon afterward, Amara noticed CID Detective Dante Wolf leaving the area, and became increasingly paranoid about the situation. Amara met with Dante to discuss the situation about King, and in an attempt to try and cover up her potential corruption. The conversation did not go as well as Amara would have hoped, and she got the impression that Dante might tell others, and potentially cost Amara her life.

Amara soon found out from Mother and James Carter that a “white-haired EMT” was also on Bovice Wilkinson’s "Hit List." Amara recalled a situation with Kiki Chanel, in which she asked Amara to deliver a "shank" to her in prison for Bovice. Amara told Kiki she would, but then told EMS High Command and the police about the situation, who then went to the prison in her stead.

Since then, Amara had been laying low in fear of losing her job and her life.

Amara’s dating life has always been complicated. She briefly dated Al Saab; but they both decided that because of his criminal affiliations, and her job, that it was best to not pursue a relationship together.

Amara also pursued Pillbox Medical receptionist Brenda Pancake for an extended period. However, Brenda continually shot down Amara’s advancements, despite Amara feeling like Brenda was stringing her along. After continued “friend-zoning” from Brenda, Amara started to date other people, including Emily Reinhart, Al Saab again, and eventually Tessa Lamb - whom she became exclusive with.

Brenda and Saab did not take well to the news of Amara dating Tessa. They schemed to make Amara jealous, by acting like they were dating. This plan eventually backfired, as Amara had suspicions from the beginning that they were trying to cause a rift between her and Tessa. Both Saab and Brenda confessed to Amara eventually, but Amara did not take too lightly to it, and caused slight tension between the three.

Amara continued to date Tessa, which seemed to be going very well. However, after a shift on duty with Brittany Angel an LSPD Officer (in which Angel saved Amara from being kidnapped), Amara started to doubt her relationship with Tessa. Amara started to pursue and flirt with Angel via text, and they eventually set up a date.

Amara had it set in her mind she would break up with Tessa, however, when the time came to do so, she started to have doubts. Amara told Tessa about the potential date with Angel, which Tessa did not take well. Before this, Amara also had subtle suspicions about Tessa’s split personality, Mary Wolf, a serial killer. This intrigued her enough to pry a little into the times that Tessa acted “a little off.” Mary eventually took over for Tessa, and broke off the relationship.

Amara was torn after this; she felt like it was a mistake to try and end the relationship and tried to fix things with Tessa again. Amara spoke with Angel briefly, and told her it was never her intention to date her. Angel did not take this well, and caused an irreparable rift between the two. After speaking with Tessa multiple times, Tessa eventually agreed to rekindle their relationship. Amara stayed dedicated to Tessa after this, and eventually asked Tessa for her hand in marriage. Tessa agreed, and they’re now engaged.

Amara was very close to most of the hospital staff. She considered Dr. King her “dad,” and is also very close to Andrew Ducksworth and Boba Stone; as they were instrumental in her training as an EMT, and there for her when needed.

Amara’s relationship with the PD was strained, however; due to her rejecting both Reinhart and Angel, along with her reputation of being unfaithful in relationships. There was also suspicions about her involvement with The Watchers, through investigations within the CID. 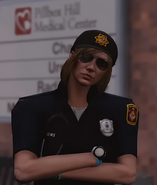 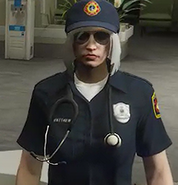 Retrieved from "https://nopixel.fandom.com/wiki/Amara_Harte?oldid=76960"
Community content is available under CC-BY-SA unless otherwise noted.