Allen Widemann is a character role-played by Hotted89.

Nino asked Allen to be the manager, as the previous manager was causing problems. He grew the company from 20 employees to a total of 180+ as of 8/8/2019.

After being so successful with Clucking Bell Farms, Nino promoted Allen to the COO (Chief Operations Officer) Of Sahara International where he oversees all projects and investments of the company.

He bought PDM from Vinny Pistone. Vinny had issues with being a member of the Chang Gang and being the owner of PDM, so Allen bought it from him.

He's a car enthusiast, a lover for high speeds, and an avid racer.

Allen is currently the COO (Chief Operating Officer) of Wu Chang Records. His primary responsibility is organizing and producing events for song releases and managing Wu Chang Records various artists. He has also personally funded various contracts and rewards for the company.

Shortly after the HOA's creation he became a sponsor for them, even supplying them with a complementary patrol vehicle (a Granger.)

On March 12th, 2021, under Ramee El-Rahman approval, Vinny Pistone stepped down as the Owner and Allen took control of the business to keep it within Chang Gang control. 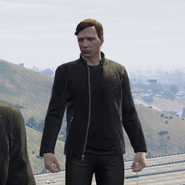 Retrieved from "https://nopixel.fandom.com/wiki/Allen_Widemann?oldid=94576"
Community content is available under CC-BY-SA unless otherwise noted.