Not much is known about Alice's history besides the fact that she moved to Los Santos after a tough breakup that involved her ex-boy friend who was a cop calling in a raid on her gang and family and ending in arrests, deaths and a few, including Alice, able to flee to another city. Alice has only ever known crime and grew up in the streets as a kid so she doesn't understand how to live a clean life or work a typical job. With her past of being a gang leader and a very long time criminal it was inevitable she would find her footing with The Hidden.

On her first day in the city she met Cooper Hart who pulled up outside the apartments in his Liberator truck (Everon). When he saw her and said "you've got a pretty mouth, hop in" Alice hopped in and instantly hit it off with Cooper, they got to know one and another and was introduced to his Brother Wilson Hart and some of his other friends. After a while Alice started doing crime with Coop, Willy & Charlie which brought them all closer together and they quickly became quite a tight group. They together formed the group The Hidden in which Alice is "The ExTherminator" and is usually in charge of thermite during robberies. They started saving their money and after purchasing her Dubsta 6x6, which she calls the 'Pussy Wagon', her along with The Hart Brothers saved up and bought a mansion on Rockford Drive which is where she, Coop and Willy all currently live.

Alice is occasionally seen picking her wedgie and flicking it at people when someone says something she does not like and can also be seen on twatter tweeting about her large farts every time the city shakes or a meteor hits. 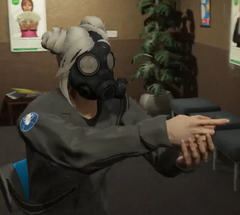 Alice started doing robberies with The Hart Brothers and after a while they created The Hidden. The group did many robberies including many Jewelry Stores, The Bay City bank and even the occasional Paleto Bank. Alice became the groups go to person for thermite dubbing herself "The ExTherminator" and wearing an exterminator outfit. While she sometimes feels unconfident in her thermite abilities her success rate is quite high and most of the time gets the job done with no trouble at all. Due to Alice's loud and fast typing skills (100 WPM!), the gang thought she would be good at hacking and she managed to get a practice laptop from Vince Watson. With the help and encouragement from Israel Quackeenbush (another member of The Hidden), she spent hours practicing and used up almost all of it's battery before letting a friend practice with the remaining 10%. Her friend later returned the favor by giving her a 2nd practice laptop that had 30% remaining in which Alice practiced non-stop in order to try and get better at hacking.

Alice has done some small robberies without the others and has started teaching her friend Bertha Edna about safecracking, They successfully robbed a store and Alice successfully got away by yeeting their car into the canels and swimming away. She seems to be a great swimmer and has not been caught yet in a swim chase, always being able to outswim the cops. Unfortunately, during the escape Bertha did not escape and the hostage was locked in the trunk when it was yeeted into the water.

Alice quickly has become the main hacker for boosts with The Hidden, something Willy felt strongly that she would be really good with. She hopes to move past A+ hacks one day and become an S+ hacker.

Due to the alliance between The Hidden and Royal Mafia, both groups have helped each other in crimes and at times members of The Royal Mafia have come to Alice's rescue during robberies. Alice has also on multiple occasions, along with the boys, helped out members of the Royal Mafia.

Alice hopes that one day her and The Hidden will be able to do bigger and better robberies and become well known criminals in the city. With this goal in mind, she has helped the group set their eyes on expanding and really helped both Coop & Willy with running the group.

While doing crimes Alice uses a lot of different aliases but the main ones she usually uses are Lilac and A-Money, especially when doing robberies. Alice usually points finger guns at hostages while waiting for the vaults of banks to open and seems to do a great job making the hostages think it is a real gun.

Alice and Cooper spent a lot of time together and allice quickly became very fond of Cooper and although Cooper would rarely admit it, it could be seen that he was also quite fond of Alice. It quickly became quite obvious to those around them that they were meant to be together as they shared great chemistry and commonly got mistaken as a couple by others around the city. Alice was constantly trying to 'make it official' between her and Cooper but Cooper came off as hard-headed, stubborn and playing hard to get. Due to this, Alice planned many great outings and even took Coop on the most amazing "outing" for his birthday in which they both very much enjoyed and had a blast. Alice and Cooper enjoyed each others company and the time they spent with each other. There is a noticeable chemistry between the two of them and they were always seen flirting. For awhile, although not yet official they were always seen as a couple by friends and people they would hang around with in the city and they often referred to their relationship as 'it's complicated'. Finally after many "outings" that were more like dates, they made it official with Cooper giving Alice a promise ring.

Due to Alice's Relationship with Cooper, she has become quite good friends with Willy. They, along with Cooper who is Wilson's twin brother, saved up and bought a mansion on Rockford Drive. Willy is also a founding member of The Hidden and they usually do crimes together along with the other members. Wilson loves to hunt and fish and hence why they usually attend fishing tournaments together.

Bertha and Alice have quickly become really close friends and seem to get on really well. With Bertha being quite new to the city, Alice has kind of taken her under her wing in regards to crime, taking her to rob a store and planning on doing some bigger robberies together. Bertha has became quite the boxer winning a Tuesday Bruiseday and Alice has been seen to be a big fan of her boxing skills as she was seen cheering on and supporting Bertha from the sidelines.