Alexandra Carlson is a character role-played by TheAmelina.

Alexandra Carlson is a Solo Cadet for the Paleto Bay Sheriff's Office, Badge #688.

Born the heiress of what was seen as ‘The Carlson Empire’, Alexandra had a very privileged life growing up. Her father, Nicholas, inherited the family car business and expanded it greatly, increasing the wealth and status of the Carlson family.

It was always the plan to have Alexandra be the next CEO of the company, training under her dad’s wing to take over. With these ambitions in mind, she enrolled into law school, in the hopes of being able to work for the company’s law wing as she grew up.

Being let loose from the strict demands of her mother, Alexandra flourished at university. While still a perfectionist at heart, she let her standards lower a bit, in favour of experimenting while at school and making new friends. She got rolled into a habit of partying a lot as she finished her degree. Despite her parents’ thoughts and comments on Alexandra’s changed behaviour, she didn’t listen to them.

She continued her streak of partying as she started working for Carlson Enterprises, when one day her father called her into his office. As she didn’t listen to her family’s complaints, they removed her entirely from their will and from the plans for the future of the business, until she proved that she was worthy and willing to work hard.

Before Alexandra was able to turn her life around and take a step back from the lifestyle that she had adapted, the so-called “Carlson Massacre” took place. As Alexandra was on a weekend trip away with friends, the ‘Carlson Killer’ infiltrated the Carlson Mansion and killed the three family members that were there at the time. The bodies were found the next day by Alexandra as she arrived back home. It is said that the scenes were extremely gruesome, with blood smeared all over the rooms in which the victims were killed.

As for her family’s empire, due to the paperwork that Nicholas had set up in regards to Alexandra’s behaviour and her future a long and lengthy trial took place between Alexandra and one of her father’s business partners, in regards to the company and the family’s wealth. Alexandra lost heavily, and the whole Carlson estate went to someone else.

As Alexandra was trying to get her life back together afterwards, she was taken in the streets of her new apartment and driven somewhere unknown. At that place, she was held and tortured for information on part of the Carlson's wealth and their underground activities, information she wasn't given due to her parents' mistrust towards her. Unable to give the needed information, she was severely hurt. . She decided to not go to a hospital afterwards and take care of her wounds herself, unable to trust anyone.

Sick of being recognized whenever she went out, Alexandra decided to move to Los Santos and start fresh. She decided to focus on her law degree and fight for people who, in her own words, “get fucked by the system”. She had to learn to stand up for herself the hard way, and wants to help the people that can’t represent themselves in a matter that they should. She wants to leave the implications of the Carlson name and brand behind, and create a new meaning of her name.

Alexandra tries to be as confident as she can be, and in general isn't afraid to speak her mind. She tries to hide her doubt whenever she can, not wanting to show any signs of weakness to others. Due to her experience surrounding her family's death, and the aftermath of it, she has difficulties fully trusting people and tends to keep a wall up. Only a few people have started to learn a bit of her past in Belgium - and what she has shared so far is only the surface level of it. Her distrust also reflects in the way she reacts to her friends lying to her. She feels like the people she's closest with don't need to share everything, but lying about stuff immediately triggers her walls and shuts her off from those people. She knows people in Los Santos will lie to her, but feels like it is a no go when it comes to friends.

Alexandra obtained her bar license after the participating in a mock trial on June 26th 2021. During this case, she was part of the Prosecution (together with Arthur MacNee, Alfred Neuman and Jim Haze). The Defendant, Nicky Vein (played by Antigone Weston) was found guilty of Serial Assault and Killings, First Degree Murder x14, Murder of a Government Employee, Desecration of a Human Corpse and Terrorism.

After obtaining her bar license Alexandra joined the DA's Office as Prosecutor. After the changes in the DoJ she got hired as a special prosecutor for the PD.

After nearly dying due to gunshots and drowning, Alexandra has been struggling to keep her head together and doubting whether to let people in, or focus more on keeping her wall up. During this time, she has been spending notable time with Odessa Pearson and Lea Nova, but has shown signs of struggle on how much to let them in.

After her recovery, Alexandra got in a relationship with Lea Nova, leading up to a marriage, four children and them sharing a house in Paleto. 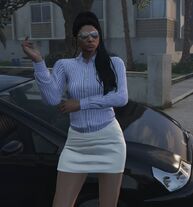 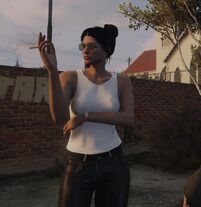 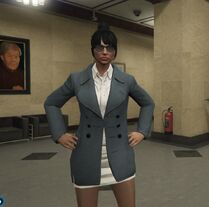 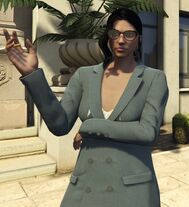