Aleksander Sazkaljovich is a former member of the Angels and The Russian Mafia. He is now a part of Hydra Gang.

He was born with blond hair but likes to dye it white and generally wears clothing of the brand "bigness". He has a Russian accent, but after many years in Los Santos, you can only hear slight traces of it. Aleks is known to be a bit of a flirt. He is also said to be a "rat" due to his love of driving through alleyways in getaways, but hates bikes and considers them "too ratty."

Growing up as the younger brother of Vladimir Bogorov, naturally Aleks was introduced to The Russian Mafia after reconnecting with his older brother. He was recommended to Boris Ivanov to join the crew, and began to prospect for them shortly afterwards. However, this did not last long- He was blooded out of The Russian Mafia after refusing to go after Olga Sazkaljovich and Hydra Gang under Boris' orders.

Due to his loyalty to Olga, she adopted him into the "Sazkaljovich" family meaning that his last name was changed to Sazkaljovich. 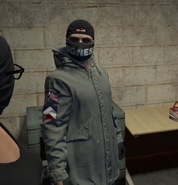 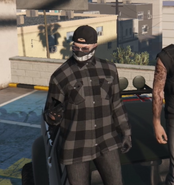 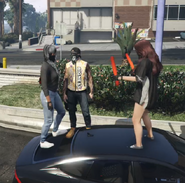