Black
Alabaster "Pimp" Slim is a character role-played by Kyle.

Alabaster Slim is the CEO and Founder of Cop Killa Records - "WE OUT HERE, Mu'fuckah!"

He is also CEO of the Vanilla Unicorn Strip Club.

Alabaster Slim obtained the Vanilla Unicorn Strip Club (VU) he oversees conflicts in the South Side with connections to every gang in the city and monitors the black market economy. Alabaster Slim has recognition among the entire city of Los Santos and if disrespected he will not hesitate to destroy your reputation as well as your life.

Slim moved up from being a local street pimp, to supplying the criminals of Los Santos with drugs, small arms, and thermite. Dangerous even without a weapon, as he is never without a pocket full of powder to "pimp slap" both bitches and he-bitches alike.

Slim was on the run for 21 days after a prison break, along with others. He recently turned himself in and received 2 years in prison, with mandatory parole once released. During his parole, he worked as the receptionist at Pillbox Medical.

Alabaster Slim is a hot-headed, aggressive man who resorts to violence over civil conversation in most cases. Rather than gaining respect through charm or charisma, he uses power and violence to control those below him, and earn respect from those around him. While he does prefer to barge in guns ablaze, he also proves himself to be a clever, quick-witted leader and organizer in dire situations. Slim is a slippery sharp-shooter with crisp reflexes, and an arsenal to match.

Although he is against the notion of being told what to do, it is common for Slim to allow others to make the plans or take the lead in jobs like robberies or shoot-outs. He often describes himself as "too lazy to care", hence him never disguising his voice or attempting to wear incognito outfits.* He also refuses to work legal jobs, no matter how dry his bank account is looking.

Slim is known to have close relationships with many criminals. Until his recent recruitment, he was one of the most-known criminals to not be affiliated with a gang.

He has close ties with Yung Dab, Eugene Zuckerberg, Lang Buddha, and Outto Tune Tyrone; all of which whom he can be seen frequently robbing banks with, or doing various other actives.

Feeling that all his close friends have branched off from CKR, Slim was offered to join the Leanbois and joined as an affiliate. Slim decided that the Leanbois lifestyle was not for him but will continue to help the gang

*Slim has been seen as "incognito" following his prison break. He used this disguise during the assassination attempt [1] on Rocko Colombo and Mia Mersion.

Alabaster Slim is 48 years old. He has several tattoos on his body, including the dollar sign on his right forearm, dollar bill on his left forearm,  hipster tattoo on his neck, and stop sign tattoo on the back of his left hand. He wears highly durable makeup, earrings, and has a moustache. His black hair is usually either straightened and pulled back into a ponytail, or hanging free in tight frizzy curls. During the war with the Lost MC, he cut his hair off.

Slim can often be seen wearing his signature pimp coat or a bulletproof vest, as well as a hat, and a black sock mask. He wears white gloves, often coated with baby powder, and has recently taken up wearing UGG boots, rather than dress shoes.

Slim rarely strays from his regular wardrobe; even for illegal activities like bank robberies, hold-ups, or general malicious crime. He is easily identified by the police due to this, and the fact that he hardly ever disguises his voice.

After deciding the Leanbois lifestyle was not for him but will continue to remain close to the gang. He has returned to his CKR roots and wants to rebuild his fortune. He is reconnecting with previous associates like Eugene and Gomer. He plans to get back to the business of killing cops.

After obtaining the Vanilla Unicorn Strip Club (VU) to become more a powerful figure in the city he's ready to make changes to the South Side and bring entertainment to the citizens of the city.

Alabaster Slim's prior convictions list as of Wednesday, December 11, 2019. 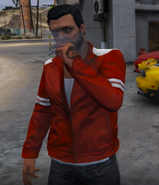 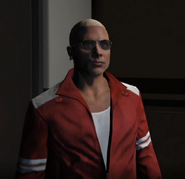 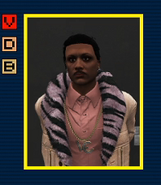 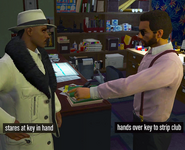 Coop Holliday hands over VU key to Slim on behalf of Nino
Add a photo to this gallery
Retrieved from "https://nopixel.fandom.com/wiki/Alabaster_Slim?oldid=33074"
Community content is available under CC-BY-SA unless otherwise noted.