Aja Monet is a character role-played by hobbittrash.

Aja Monet is a fresh faced, new to the city girl who is looking for friendship and a job.

Aja is cousins with, Tracy Martell, who she hates because when they were kids Martell called Aja names.

Second Day in the City

On her second day in the city, Aja Monet, helped Marlo Stanfield get away with robbing a man she was with. After a while she ran into him again. He was fixing his car that had crashed in the middle of the road with Fiona Stewart. Aja demanded both friendship and a job from Marlo. She ended the day with both Marlo and Fiona's numbers.

Aja was hired at UwU Café on January 18th, 2022. She began making a note of what she heard and saw during her first few days on the job. Having a grudge on Patricia and crushing on Max.

Despite her initial blunders, she rapidly settled in to the position and began to like herself as time passed.

She decided to phone complete strangers from the yellow pages to come to UwU Cafe and buy from her while she was there.

Eric, who was one of the persons she phoned, challenged her to see who would be the first to arrive to UWU based on their train tickets. He was skeptical about who would win. But, in the end, Aja emerged victorious.

Eric had hinted to Aja that he would take her out on a date, but he timed it poorly. On a cold, dark, and rainy day, he gave her a bike and the two of them drove up to the mountains. Aja had no idea what he was up to and was wary about the journey. But, out of curiosity, she went through with it. Before returning to town, the two sat by the edge of a tiny hot spring and talked for a while.

Patar became a friend of Aja's, and she began joining him and his team to film a movie in the hopes of him assisting her in her career as an actress. However, due to a series of events, they were unable to reconnect with one another and complete their project.

Aja has been hanging out with The Mandem group. Selling guns and drugs for them, even going on "jobs" with them. 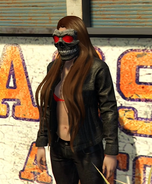