Dropped from a building by Chuck the Construction Worker

Adrienne West was a character role-played by Evee.

Adrienne West was the former District Attorney of Los Santos, and later worked as a criminal defense attorney for the Department of Justice. After being separated since they were eight years old, Adrienne recently discovered that Brittany Angel is her fraternal twin sister.

At six years old, Adrienne and her sister, Brittany Angel, were forcibly removed from their parents, and placed in a group home for young children. This was an extremely traumatic event for both sisters, and two years later they were separated and sent to live in different households on opposite ends of the country.

When Adrienne was 18 years old, her adoptive parents kicked her out, and she was forced to temporarily live on the streets. Shortly after, she discovered a life of crime, and became the sixth "Mime Queen". The reigning "Mime King", Jayce Rite, still wants her dead for defecting from the Mimes.

Adrienne West has been tied to several kidnappings, disappearances, and murders. She was under investigation for her involvement in such events, as well as her involvement with the HOA.

Adrienne West was a former criminal, albeit not a very good one. She was also the sixth former "Mime Queen" of Los Santos, but quit after being stabbed by Melbert Rickenbacker in Bolingbroke Penitentiary. After her brief stint as a criminal, she cleaned up her criminal record and worked for Judge Aaron Byson, before getting Bar certified. After completing the expungement program, she joined the District Attorney's Office as an Assistant District Attorney. She worked her way up the corporate ladder for two months, and was then promoted to the District Attorney of Los Santos.

In early October 2019, Adrienne West was kidnapped by Chang Gang, on the orders of Bovice Wilkinson. However, the kidnapping was botched, and her best friend, Kermit Delaw, was murdered in the process. The following night, she was kidnapped by Arthur Hammond ("The Doctor") and Gomer Colton, who used Adrienne as bait to lure Bovice out from hiding. The night ended with Adrienne and "The Doctor" brutally torturing Bovice.

Immediately after, Adrienne resigned from her position as District Attorney, and underwent a complete mental breakdown. Her breakdown was made worse when Bodean Tucker, handcuffed Adrienne and forced her to look at Kermit's corpse. She had a meltdown, and was promptly placed on a "51-50 hold" at Parsons Rehabilitation Center.

It was here that she began her friendship with Raja Bahadur and Jessie Skid.

She briefly escaped to Russia after being told by Officer Tucker that she was a suspect in an attempted double homicide but has returned to San Andreas to assist Larry Hallow as a special prosecutor in The People v Chasity Dawes and to try and track down Jessie Skid's killer. However, this quest was interrupted by Deputy Tucker alerting Adrienne that she was under investigation in regards to the second kidnapping and subsequent torture of Bovice Wilkinson.

During her tenure as a Senior Attorney in San Andreas, Ms. West had tried dozens of cases. These are the ones that stand out the most.

Adrienne West was murdered on October 10th, 2020 after she was kidnapped by Mike Block, Four Tee, Chuck Ragan, and Robbie Bobbie. They kidnapped her and brought her to the top of the vault, with Mike Block convinced that Adrienne was Judge Jessica Wesker and demanded that she either fix a banking error or be thrown off the ledge. They refused to believe her when she denied being a judge, pleading repeatedly that she was just a defense attorney. After being told to "drop her" by an officer, Mike Block threw Adrienne over the side where she plummeted multiple stories to the ground below. She died due to the severe injuries she sustained from the heightened fall.

The individuals responsible for her murder were arrested and tried before Judge Coyote, with Mike Block, Four Tee, Chuck Ragan, and Robbie Bobbie all being charged with first degree murder, kidnapping, and extortion. After an emotionally wrought court case in which Mike Block bragged about her murder multiple times and stated he felt zero remorse, the individuals were eventually found guilty on all charges. Their sentences, however, left much to be desired for the friends and family of Adrienne West. For his role in the heinous crime, Mike Block received only a 7-year sentence with no parole. Four Tee was held in Parsons on a 51-50 until she could receive psychiatric rehabilitation. Robbie Bobbie and Chuck Ragan, as accomplices, received lighter sentences of 2 years and 5 years respectively, both with no parole. 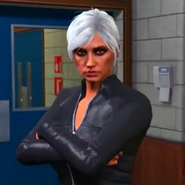 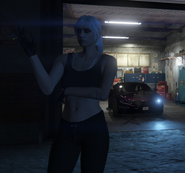 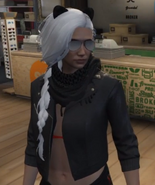 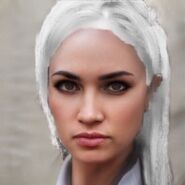