Adam Ababwa is a 21-year-old British man currently residing in Los Santos. He has black hair and a beard. He also has three tattoos; a butterfly (sometimes referred to as a moth) on his back, a sleeve on his arm and a triangle on his leg. Adam tends to wear sweatpants or tracksuit pants with a shirt, vest and jacket over. Occasionally he puts on his Benidorm-drip or his fishing-drip.

Adam is outgoing and can make conversation with anyone. He has little or no filter and is not afraid to call people out. For that reason, some people might see him as a bit of a dickhead, but this is only a part of his tough exterior. When you get to know him and he learns to trust you (which will take a while because he has trust issues AND is very impatient) he will easily help you out. For his boys, aka the people he trust with his life (doesn't have to be boys, that is just a term), he will help them out. This is seen especially when he is the one to easiest give out loans to the other guys. He might move fast, but he is very dedicated to the group.

He is quick-witted. He often winds people up on purpose and enjoys it. He lives in the now and is very easy going. Adam is good at talking himself out of situations, and has talked himself out of several minor charges.

Adam ran into Dundee whilst running Oxy who gave him a business opportunity of a lifetime. Adam accepted the deal and was in talks with Barry for work.

Adam Ababwa was a Gem Appraiser at Vultur Lé Culturé until he got suspended for buying lower value gems at full price for his friends and taking a cut. In addition to this, he and Moses accidentally hit Curtis while driving. Ultimately it ended in Adam getting shot at the gallery and fired from the job. He was offered his job back when he and the guys went to speak to CG and everyone but Adam got attacked by a panther. He went on strike for a week and was back to working before his disappearance - although he rarely actually do any work. Other than this, he had other jobs, such as being on the security team at Wu Chang. He had also been trying for months to get a job at burger shot but his attempts have been unsuccessful. As a result of his disappearance, he lost all his jobs.

When Adam was not working around the Gallery, he was previously seen hanging around Tucker, Dean and Moses. The four of them together once went on a forum drive in a shootout with local gang GSF. He usually does Oxy runs or rob houses. He has recently expressed that he is tired of the legal life and instead to live life to the fullest, whatever that might mean.

He had become involved in the racing scene with Tommy, and the two of them had planned to go half and half on a racing car. Adam had his brain surgery on the 9th of June and was since able to drive.

Adam trademark is '/e fall4', and when he falls he say "DYAAAAHHH" in a shaky voice. When it is smoke season, he changes his appearance.

Adam was "kidnapped by Ukranians" and kept hostage for 4 months and 6 days before Tommy and the Mandem boys found him rotting on an island just off the shore. Since his reappearance, he hesitates to do anything too mad, because he fears that the Ukranians will take him back.

Adam was addicted to NOS before the Ukrainans took him.

For events including 3 or more Mandem-members that are done in a group/gang manner, see the Mandem wikipage.

Other friends and aquaintances:

Former friends/faded relationships:
Cardi Beach - Cardi and Adam have a complex friendship. When they met, Adam initially tried to get Cardi and Tommy together thinking they were long-time friends when in reality they had only known each other for about a day. Then they spent a night together doing Taxi-work as Cardi is a taxi-driver for Abduls Taxis. Now, they argue and banter like siblings. Adam likes to wind people up and Cardi gets easily annoyed. They almost had a fallout when Adam and the guys asked her fishing and then left her in the middle of nowhere. They had a long talk on the phone and explained everything and then they became friends again. They then had a falling out again when Cardi called the Mandem for help with someone who had been putting her in the hospital. Turns out she snitched on a member of the Ballas, and the Mandem didn't want to get involved to avoid a gang war. They had a big discussion with her and Cardi said she was done with Adam (and Remy) after this. They are all good now, but Cardi has recently moved to the Bahamas.

Adam and the Mandem got matching outfits for fishing.

Benidorm drip with mask on. 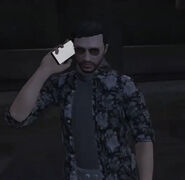 Adam in his alternative grey drip