AJ Hunter is a character role-played by RatedEpicz.

AJ Hunter is a Trooper for the San Andreas State Police, Badge #207.

He was previously a Sergeant for the Los Santos Police Department, Badge #407.

AJ is one of the longest standing cops in Los Santos, serving on the force for 4 years. While he is one of the more lenient Command members, he has been praised by Officers as both leader and FTO, due to his upbeat and reassuring teaching methods. He can be easily identified on scenes by his signature eye black makeup, dark brown spiked hair, and unique neck tattoo.

The description of "one of the scariest cops on the force" has been given by several criminals, in reference to AJ's response in situations. He is widely regarded as one of the best shooters on the force. With his situational awareness and gunfire precision, AJ excels as a "Combat" sergeant for the San Andreas State Police; leading his team with a sense of urgency, tactical advantages, and ensuring constant communication.

While he shines on the field, AJ lacks enthusiasm when it comes to processing and investigations. Though he tends to keep reports short and to the point, he has shown the ability to provide in-depth and solid paperwork (if absolutely necessary). This was displayed recently in the court case to convict Mr. Chang of murder; his thorough report providing a solid backbone for the final ruling of "Guilty".

"Soon to be Trooper" by Bryce Miller 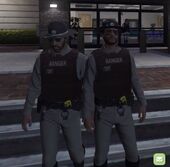 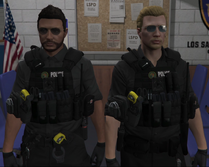 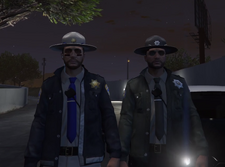 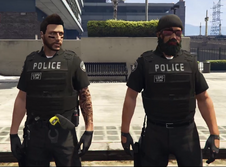 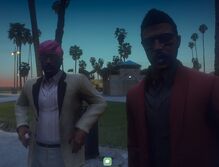 Displate Art
Add a photo to this gallery

Retrieved from "https://nopixel.fandom.com/wiki/AJ_Hunter?oldid=69951"
Community content is available under CC-BY-SA unless otherwise noted.